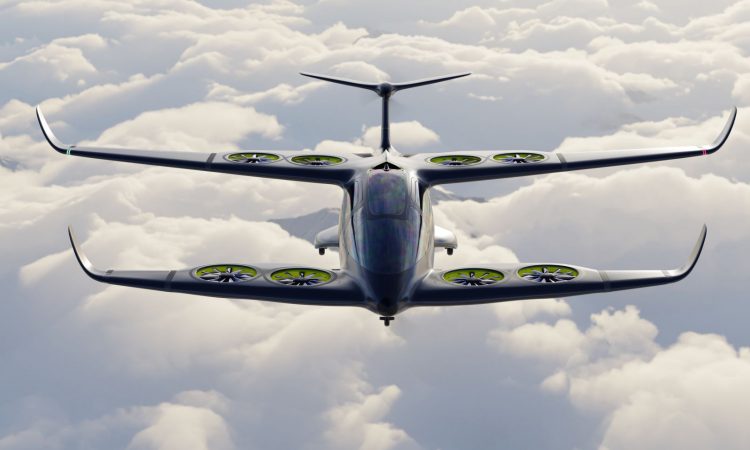 This week Ascendance Flight Technologies unveiled designs for its hybrid-electric aircraft, reports a press release. After three years of R&D, the French start-up made public its design of ATEA, the company’s 5-seater VTOL.

Constructed to operate in areas on the fringe of urban areas with a travel range of 400 km, carbon emissions reduced by 80 percent and noise pollution greatly decreased, ATEA “blends sleek and audacious design with unprecedented fan-in-wing technology and optimised engine configuration.” Production is scheduled for 2025. Equipped with “bespoke modular hybrid engines”, ATEA is being designed to satisfy “the high demands of both passengers and stakeholders of reinvented aviation.”  The aircraft ensures an “optimised, easy-to-use and agile operation required for a variety of uses, whether for passenger transport, emergency services, logistical tasks or for surveillance flights.”

Jean-Christophe Lambert, co-founder and CEO, commented, “The design of ATEA is a reflection of our values, our experience and of our know-how. The aircraft we are presenting to you is the result of huge efforts by our R&D department, tests and trials on 4 prototypes and a great deal of thought on costs and the ease of flying such an aircraft.” Adding, “Its characteristics provide all the performances expected by a sector that the ongoing transition has made more demanding.”

The release explains, “The new ATEA configuration has integrated a hybrid system patented by Ascendance called STERNA. This system is devised on an electric engine powered by the merging of two energy sources: combustion and electric (battery).” And goes on, “Over time, the company is planning to phase out the combustion energy source and replace it with new sources of cleaner energy such as hydrogen or Sustainable Aviation Fuel.”

Patented by Ascendance, eight new generation rotors are now featured on a tandem wing configuration according to the “fan-in-wing” principle. This covered rotor technology allows increased power during the take-off and landing phases in addition to significant noise reduction. The number of rotors “guarantee manoeuvrability of the aircraft in case of failure.”

Meanwhile, the aircraft’s lift and cruise system “provides separation of vertical and horizontal flight which are ensured by the rotors for the former and by propellers located in the nose and tailfin for the latter. The resulting absence of pivoting mechanisms therefore reduces risk of failure, which also simplifies the aircraft’s certification while improving overall aircraft safety.”

Lambert continues, “ATEA will soon exist in the form of a full-scale prototype and will go into testing phase in 2023. We are running test and trial programs, recruiting new employees, and are moving towards our 2025 certification objective.”

Founded in 2018 by Jean-Christophe Lambert, Thibault Baldivia, Clément Dinel and Benoît Ferran, Ascendance Flight Technologies is based in Toulouse. The company is developing a hybrid propulsion system called STERNA for its ATEA Aircraft. It is designed for urban and regional use in passenger transportation, tourism, medical emergencies, logistics and surveillance. This 4-to 5-seat craft will be presented in partnership with ADP at the 2024 Paris Olympics.