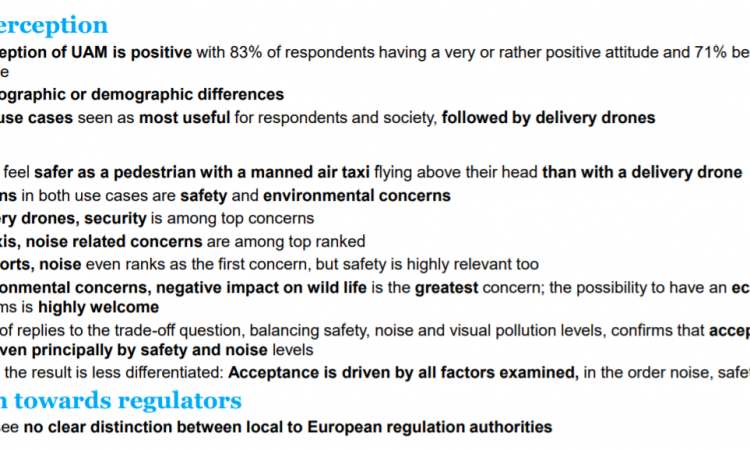 The on-line quantitative survey polled 4,000 citizens in six European urban areas. This was complemented by more than 40 qualitative interviews, as well as a noise simulation test. The survey showed that 83% of respondents have a positive initial attitude towards UAM, with 71% ready to try out UAM services. Cases in the common interest, such in emergencies or for medical transportation received strong support. EASA will use the study results to prepare an impact assessment and regulatory proposal for Urban Air Mobility in Europe in 2022.

“We are not planning to certify the entire eco-system…local decisions need to be taken by local actors,” Patrick Ky, EASA Executive Director Patrick Ky, introducing the results of the survey at a press conference on 19 May.  “So what we intend to do is certify the aircraft to provide our views on the constraints on the operational environments in which this aircraft is certified to operate safely and then it will be up to local authorities to take those constraints into account for certifying the vertiports and landing sites also the highways.”

The study concluded that all regulatory authorities must work together at all levels and that citizens do not differentiate between different levels of authorities. All local and national stakeholders indicated they clearly wanted to take a role in the introduction of UAM; they expected clear guidance from European level but they also wanted to be involved in concrete local decisions, for example involving routes, traffic frequencies and the location of vertiports so they could create local buy-in. 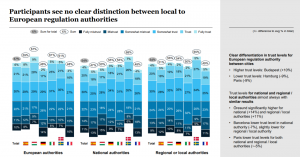 “We are working on regulatory development in aircraft certification, aircraft operations, remote pilot licencing and assurances needed for different levels of automation of the vehicles, maintenance requirements, landing sites and integration of the ATM environment,” said Maria Algar Ruiz, Programme Manager Drones at EASA. “We are providing these regulations and guidance to the national aviation authorities and local authorities so they can take the decisions on where and how to implement UAM.”

The study was carried out together with the consulting firm McKinsey & Company and the Arup Sound Lab between November 2020 and April 2021. Other key announcements at the conference included:

The study polled citizens and local authorities as well as other stakeholder groups. There were clear messages from the town hall respondees:

“Municipalities are concerned by the lack of public space, particularly in European cities, which have old historic centres. There is a strong competition for public space. In this regard, the conditions for the deployment of UAM in European cities may differ from that of other countries (eg USA). They are also concerned by safety aspects (how to avoid that the aircraft ‘falls down’ on the citizens), and by noise aspects, wondering if some ‘noise corridors’ would have to be defined….

“Municipalities believe that prior analysis would be needed on how UAM fits in the city’s transport needs and network. They would probably need to re-define all the city’s mobility policy and assess exactly which infrastructure would be needed (eg vertiports, high rise buildings, etc.)). They also consider that a mapping of interested local stakeholders would be required an that demonstration/test case would be a pre-requisite, as well as transparent and accessible information for the citizens to re-assure them on the level of safety of these operations. They expect to be associated to the decision-making (see Manifesto)

“Municipalities don’t feel sufficiently informed and are interested in obtaining base-knowledge, such as access to market studies on UAM, guidance/familiarisation material for local authorities (incl. consequences on ground infrastructure) to assess the potential of this new mode of transport. The residents/citizens would need also to be informed about the technology and have their questions answered. They expect EASA to support in this work.

According to Patrick Ky. “For EASA as a regulator this information is crucial. It will allow us to set up the rules and regulations for this area in a way that is aligned with the expectations and perceptions of citizens.”

The cities chosen for the online survey were Barcelona, Budapest, Hamburg, Milan, Öresund (Danish-Swedish cross-border area) and Paris, with a minimum of 600 people from each location invited to respond. These cities were selected via a standard market analysis and the survey recipients selected to be representative of a cross-section of the local population of each city.