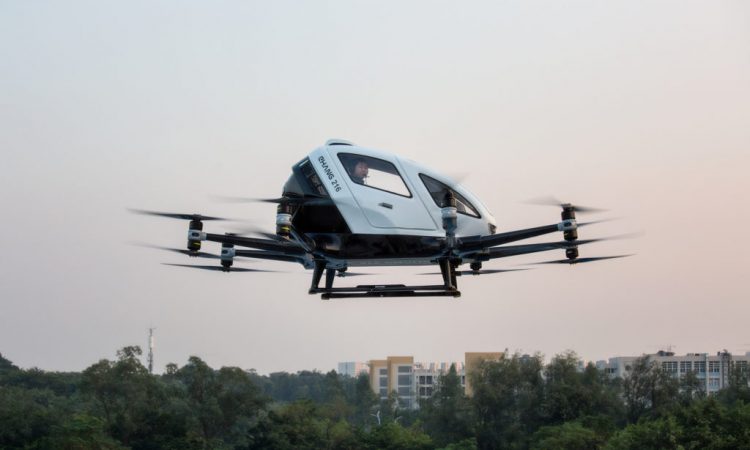 EHang announced last week that the Civil Aviation Administration of China (CAAC) has established a Type Certification Team (TC) for the EH216 passenger-grade AAV, reports a company press release. The meetings were held in Guangzhou on April 13th-14th with the aim to advance the TC approval work of the AAV. This is unprecedented for the CAAC concerning unmanned aerial systems.

During the initial meeting, expert members of the CAAC TC team “investigated and evaluated the design features, technical points, safety performance and other aspects of the EH216, followed by a field trip to EHang’s Research and Development Centre.” The team was led by Wei Chen, Deputy Director of the Central South Regional Administration of CAAC and Heyong Lin, Director of the Airworthiness Certification Office. Chen commented, “Type Certification of the EH216 passenger-grade unmanned aerial system is a highly innovative project that calls for breakthroughs in the conventional certification process while preserving standard promulgation.” Originally, EHang officially submitted the EH216 type certificate application to CAAC in December 2020. It was accepted a month later.

Yin remarked, “Unmanned aviation is an integral part of the construction of intelligent civil aviation and may become the primary form of transportation in the future.” He continued, “The Government and companies should work together to promote the development of unmanned aerial vehicles and adhere to high-quality standards when building the civil aviation infrastructure. Both the applicant and CAAC should have innovation mind-set in the certification process while benchmarking international standards.”