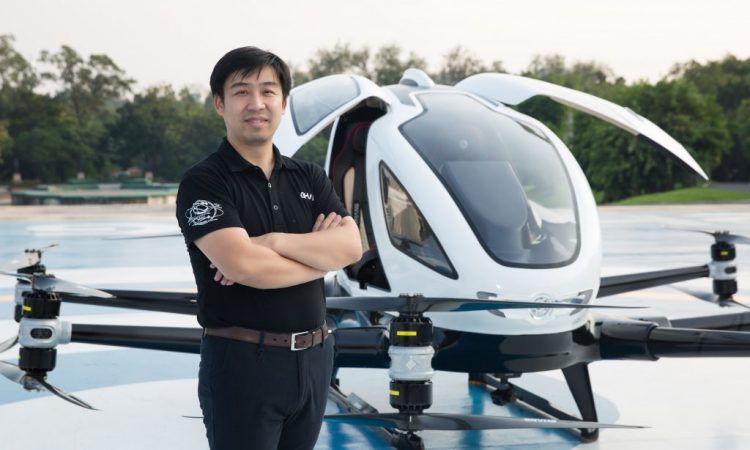 The Chinese air taxi company, EHang, won’t forget Wednesday, February 17th, 2021 in a hurry. It was the day when U.S financial analyst and research company, Wolfpack, published a damning report about EHang, describing the company as “an elaborate stock promotion, built on largely fabricated revenues based on sham sales contracts with a customer who appears to us to be more interested in helping inflate the value of its investment in the company.”

The report then accuses EHang of boosting its perceived value “with a collection of lies about its products, manufacturing, revenues, partnerships and potential regulatory approval” for the EH 216 Autonomous Aerial Vehicle.

Not surprisingly, EHang’s share price collapsed on Wednesday by 62.69 percent from USD124.09 to USD46.30. A dramatic crash rarely seen since the dotcom bubble of the late 1990s.

Yesterday also saw EHang’s founder, Mr Huahi Hu, come forward with an extensive response to Wolfpack’s report explaining why the analyst is wrong. Below are important answers to the damning claims.

A Brief Explanation on EHang’s Mission, Technological Advancements and Why the Wolfpack Report is Wrong

Q: Why did you start EHang? What is EHang’s mission?

Mr. Huazhi Hu (HH): I founded EHang to make air mobility accessible for ordinary people. We envision that, in the foreseeable future, fast, efficient and door-to-door public air transportation within and between cities will become a reality. At EHang, we work hard every day striving to realize this dream.

Q: According to the short-seller report, many of EHang’s competitors did not jump straight to an autonomous platform without first proving the concept with a human pilot in the aircraft. Why hasn’t EHang tried to commercialize piloted AAVs as a first step? HH: We believe that efficient urban air transportation should not require every customer to acquire a pilot license.  It is neither practical nor safe.

Autonomous vehicles are safer and more efficient for urban transportations if we have an intelligent command-and-control center to manage all vehicles.  Therefore, EHang did not set out to make a lighter version of helicopters. In fact, our first passenger-grade model unveiled in January 2016, the EHang 184, was fully autonomous. We firmly believe that autonomous vehicles are the key to bringing air mobility to the mass population.

Q: Why is EHang developing a comprehensive AAV platform? Why doesn’t EHang outsource the development of AAV infrastructure, such as command-and-control centers, to third-party partners? The short-seller appeared to think it is a better idea. The short-seller claimed that to get a network in place with certified vehicles would cost 5 to 10 billion dollars.

HH: As I mentioned earlier, EHang’s strategy is to make autonomous vehicles that are suitable for urban transportation. By design, autonomous vehicles must be operated by command-and-control centers. In fact, command-and-control centers, takeoff and landing facilities, and charging equipment are all crucial parts of EHang’s point-to-point air transportation solution.

Nevertheless, command-and-control centers and other AAV infrastructure do not have to entail huge amounts of monetary investments by ourselves. On the contrary, they are part of our technological solutions and are a revenue generator for EHang.

Although these core technologies sound complicated, they are centred on three most important principles: Safety, Autonomous control and Eco-friendliness.

As of December 31, 2020, we have acquired a large number of patents related to Autonomous Aerial Vehicles. The total number of patents registered or applied for amounts to 343. We are a leader in Autonomous Aerial Vehicles globally. Especially, we have developed a comprehensive team of core in-house experts and engineers who have been with the Company for many years, whom we value deeply as our biggest assets. Q: The short-seller questioned why EHang was able to make even bigger achievements with much smaller investments than its global peers.  They said that some firms were nowhere close to commercializing its AAVs after investing USD499 million in one year.

HH: We focused on AAV R&D since 2014. We have gained financial backing from leading global VCs, and, since 2017, we have made approximately USD37 million investments on our R&D.  We appreciate the trust from our investors, and we do not have a culture of burning money for white elephant money-pit projects. Every penny counts. We have relied on a group of dedicated engineers with diligence, intelligence and persistence. This is who we are. The achievement also proves that our development strategies of pursuing AAVs, not manned air vehicles, has been correct.

Going forward, as we are a listed company with a better access to capital markets, we plan to more aggressively invest in R&D to strengthen our technology leadership in the AAV industry.

Q: How does EHang manage its production quality? As you know, EHang’s AAVs are intended for passenger transportation. The short-seller report cited an expert who allegedly had a long career at NASA to claim that EHang used “hobby-grade motors’ made by a Chinese hobby motor company, T-Motor, to manufacture the EH216.

HH: It is absolutely wrong to allege that we use any motors or propellers made by T-Motor in our EH216. That expert must not have checked our EH216 in person. Starting from our first-generation passenger-grade model, the EHang 184, we have used motors that are proprietarily designed and manufactured by our designated supplier. In as early as 2015, we had established a variety of dynamic testing systems to conduct a large number of tests on our proprietarily designed motors. Regarding the motor product made by T-Motor that we allegedly used, we believe T

Motor only started to sell that product after we have conducted a large number of trial flights of EH216. The T-Motor motors are significantly different from our motor products in both technical performance and physical appearance.

We have established rigorous procedures to ensure the quality of our AAVs. Each AAV must go through a strict quality control process. Q: Tell us about the trial flights of your AAVs. Can you please tell us your own experiences of riding on EH216? How many rides have you taken so far?

HH: Of course.  I am the first passenger of our AAV and still a regular flyer. Nothing will make me more joyful than riding on an EH216 to look down at the beautiful landscape.

Since 2017, we have taken over 10,000 trial flights with our AAVs in 41 cities and 8 countries. Our AAVs have passed rigorous tests with empty-load, cargo-load, and passenger-load. Many people have experienced the flights in our AAVs.

Q: Can you elaborate more on regulatory approvals? How long do you think it will take for the urban air mobility dream to come true?

HH: So far we have worked closely with the CAAC on airworthiness certification for our EH216. We have been also invited by authorities from various countries for similar certifications. We believe our product is the best-in-class. We will proactively cooperate with the authorities in the most rigorous tests. We intend to launch more regular flights in more countries. While there remains a long way to go, I believe we are seeing the light at the end of the tunnel.

Q: Do you have any other comments on the short-seller report?

HH: Many investors believe in EHang’s mission and technological advancements, while others may have doubts. This is normal, and we need to do a better job to help more investors understand our business.  Short-selling reports are tools used by certain profit seekers on the capital market – I get that. But this short-seller did not attempt to understand EHang’s technologies and business model. Its report was based on shoddy research and contains numerous errors, unsubstantiated statements, and misinterpretation of information. In addition to the issues I have directly addressed earlier, we have the following responses to some other false allegations made by this short-seller:

HH:The short-seller falsely accused that Kunxiang, a customer of EHang, is also a shareholder of EHang and signed “sham” sales contracts to benefit its investment. The truth is that Kunxiang has never been a shareholder of EHang prior to our IPO, and to the best of our knowledge, after our IPO either. The pricing and other terms offered by EHang to Kunxiang are not substantially different from those offered to other major customers in China and all contracts with Kunxiang are based on arm-length transactions. HH: The short-seller falsely accused that EHang’s headquarters and manufacturing facility was “practically empty” during their alleged “visits.” The truth is that EHang’s existing Guangzhou manufacturing base spans a total area of 8,750 square meters and houses production facilities for our AAVs. We are building a new factory in Yunfu, Guangdong with a planned initial capacity of 600 units of passenger-grade AAVs per year.  Our security cameras did capture that a man disguised as a delivery person trespassed on one of our facilities around the time indicated by the short-seller but their photos and where they shot them are intentionally misleading. We receive regular business and regulator visits frequently to our facilities and all interested parties are invited to visit us once international travels are allowed.

HH: The short-seller falsely accused that the equity interest of Guangzhou EHang Intelligent Technology Co., Ltd. (“EHang GZ”) “likely” had been frozen by a Chinese court due to debts of EHang GZ. The truth is that EHang GZ is not a defendant to the underlying proceeding at all, as the short-seller admitted itself in the screenshot it presented. The legal proceeding cited by the short-seller involves an arbitration proceeding among EHang’s pre-IPO shareholders, has nothing to do with the RMB$40 million redeemable non-controlling interests on our balance sheet and is not expected to have any material adverse impact on EHang’s business or results of operations.

As always, EHang is committed to maintaining the highest standards of corporate governance, as well as transparent and timely disclosure in compliance with the applicable rules and regulations of the SEC and the Nasdaq Stock Market. The Company remains focused on pioneering the future of transportation and creating value for shareholders over the long term.