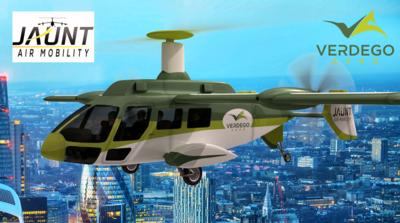 Jaunt Air Mobility announced last week a memorandum of understanding (MoU) with Flordia-based VerdeGo Aero, to research the development of a hybrid-electric aircraft, reports aero-news.net. Through the two combined technologies, the companies aim to give potential customers a variety of aeronautical products.

Jaunt and VerdeGo plan to develop a hybrid-electric version of the present Jaunt aircraft using VerdeGo’s hybrid-electric diesel (Jet-A) generator system combined with the same battery systems presently employed for the Jaunt Journey. The additional energy and thrust from the hybrid system “will enable significant enhancements offering a capability for passenger, cargo, and military variants.”

According to NASA, Hybrid-electric systems have shown the potential for significant improvements when applied to fixed-wing aircraft. “Such improvements include energy consumption, noise, weight, propulsive efficiency, and aero-propulsive interactions, among others.”

And the U.S. Air Force’s chief acquisition officer, Will Roper has stated that “with the military’s goals of flying two to four military personnel 100 miles at speeds above 115 mph, it is likely that these aircraft will be hybrid-electric.”

Eric Bartsch, VerdeGo Aero’s CEO, commented, “The additional range enabled with VerdeGo’s hybrid system applied in the Jaunt aircraft will enable either longer missions or multiple short back-to-back missions without the requirement for energy infrastructure at every landing site.”