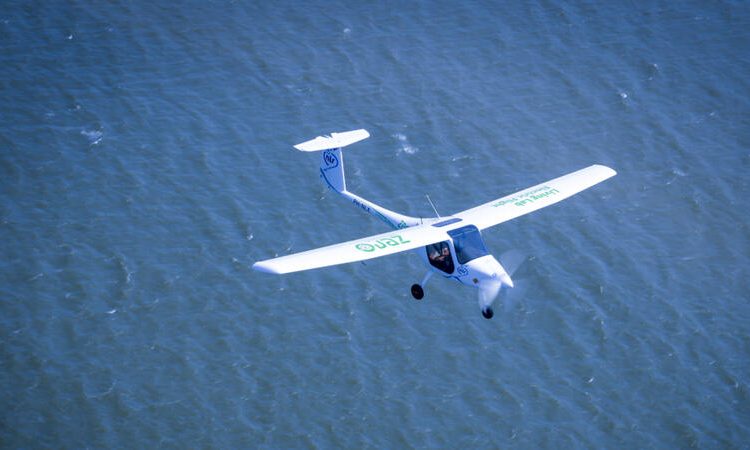 People on Aruba, Bonaire and Curacao may be taking electric planes to hop from island to island in the near future, according to a new release from Dutch aerospace research organisation NLR. The organisation has drawn up a roadmap and electric flight masterplan for the service.

Aruba is hosting demonstration flights this week by the Pipistrel Velis Electro, Royal NLR’s electrically powered research aircraft. “We’re going to show that electric flight is a clean, efficient and safe alternative to traditional aviation here in the islands,” said Angeline Flemming, adviser at the Dutch Caribbean Cooperation of Airports (DCCA), which is organising the event.

“Every year, about 150,000 passengers travel by plane between the ‘ABC’ islands. Aviation is indispensable there but needs to be more efficient, affordable and sustainable. On the mainland, there are alternative means of transport such as trains for covering short distances. The islands are relatively close to each other (distances from about 30 to 190 kilometres), so electric flight could be the answer.

“Demonstration flights on Aruba, carried out using a two-seater electric aircraft, will show what is possible. The flights are part of A flight to the future, a conference organised by the Dutch Caribbean Cooperation of Airports (DCCA), taking place from 7 to 11 November. The focus will be on sustainable aviation in the future.

“The Pipistrel’s flights are a highlight of the event,” says Flemming. “We want to show everyone that electric flight is technically possible and safe as well.” Although the demonstrations will be held using a two-seater electric plane, the ultimate aim is to fly 9 and 19-seaters.

According to Flemming, the islands are well-suited to being a test bed for innovation in aviation.

“We’ve been exploring how to implement electric flight here for some time and we’ve been carrying out various pilot projects and studies. There are strong connections between the islands – economically, culturally and socially – and that is making sure that developments proceed smoothly.”

There are other reasons as well that make the islands suitable for electric aviation. Plenty of green energy can be generated from the sunlight and wind that are present in abundance on the islands. Aruba’s airport has the island’s second-largest solar farm, generating a total of between 5,000 and 6,000 MWh of power annually.”

“The ABC islands are certainly a good application,” agrees Martin Nagelsmit, head of the environment and policy support department at the Netherlands Aerospace Centre. Together with NACO International Aviation Consultancy, NLR carried out a study of electric flight called the Electric Flight Masterplan, commissioned by the Ministry of Infrastructure and Water Management (IenW). It zooms in on aspects such as the feasibility of electric flight between the islands.

“Because of the weight of the batteries, electric aviation is limited to smaller aircraft and shorter distances,” he explains. “In the Netherlands, we have rail links or people can drive electric cars but on the islands, electric planes are a sustainable option compared to traditional aviation based on fossil fuels, and ultimately cheaper too. Electric aircraft need less maintenance and on top of that, electricity is cheaper than kerosene.”

“Several challenges do have to be overcome, though. As well as giving presentations and carrying out demonstration flights during the event, NLR is therefore – as part of the Electric Flight Living Lab – investigating the performance of the Pipistrel in a warm climate in Aruba.

“We want to see how the aircraft’s battery behaves in warmer conditions,” says Nagelsmit. “That will let us predict nicely what the flights will look like in the future and gives us a picture of the energy consumption and costs. In addition to the technical challenges associated with electric flying itself, the ground infrastructure such as aircraft recharging points also needs to be put in place.”

For longer distances, such as for flights from Aruba to countries outside the ABC area, electric flight is less suitable. There are still sustainable alternatives, however.
“For these distances, flying on hydrogen or renewable fuels is a good option,” points out Nagelsmit.

IenW will also have a delegation present during the event on Aruba. Marieke Smit, the Sustainable Aviation programme manager at the ministry, says, “We’re very excited about this initiative in the Caribbean Netherlands and warmly support the development and implementation of electric flying.”

In the same way as Flemming, Smit sees the demonstration flights as a milestone. “When people talk about sustainable aviation, they’re often painting a picture of the future. These demonstration electric flights show that sustainable aviation is a reality. We’re going to work together on agreements to make this happen, so it ought to be possible to fly electric planes between the islands within a few years. We’re going to put our shoulders to the wheel together to achieve that.”

“Our role as the government lets us help accelerate the developments,” says Smit, “for instance by making testing and experimentation easier – the first steps have already been taken for that. Furthermore, IenW is committed to building up and exchanging knowledge, for example about certification. Grants are also available for that, including some in the European context. And lastly, the government can play a facilitating role in the adaptations that will have to be made to airport infrastructure.”

Moreover, IenW works closely with the Ministry of Economic Affairs and Climate in its contacts with the aircraft manufacturing industry. “After all, zero-emission aviation also adds to the earning power and helps create a better economy.”

The Ministry of Infrastructure and Water Management, the governments of the Caribbean islands, the airports of the Caribbean islands and the Netherlands Airports Association are also signing a Memorandum of Understanding at the event. It states the parties’ intention to cooperate more closely on zero-emission flight between the islands, plus details of a strategic plan and the establishment of an innovation centre.

Flemming expects that electrically powered aircraft will be operational in the ABC islands within five to ten years. “The exact timing is still anyone’s guess but, given the rapid progress we’re making, I have high hopes.”

“The authorities, aircraft manufacturers, scientists… everyone’s pulling together to make aviation more sustainable,” adds Nagelsmit in conclusion. “At any rate, the demo flights are a step in the right direction, helping to achieve that.”