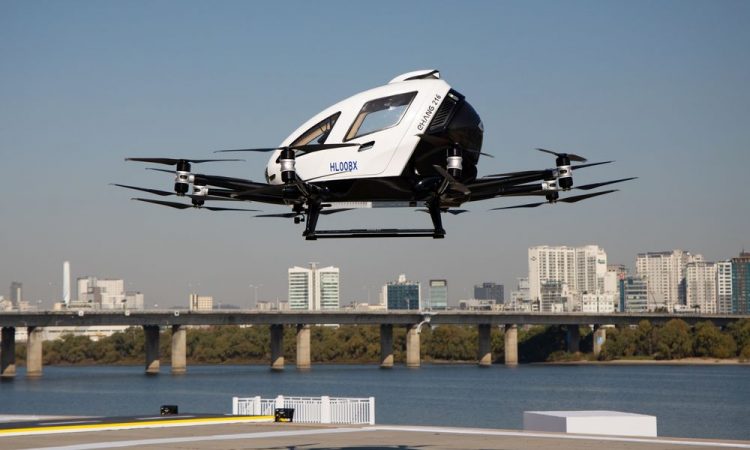 A special event took place today, in South Korea near the city of Seoul’s Han River, which offers a glimpse of aviation future, reports bloomberg.com.

The demonstration in a quiet riverside park began with the flight of several small drones, designed to monitor traffic conditions and any potential dangers. A siren rang to signal the all-clear before a larger, two-seater Ehang 216 flying taxi, made by Chinese company Ehang, vertically took-off.

No human passengers were on board the 5.6 metre-wide taxi drone due to safety regulations. Instead, it carried 70 kilograms in weight of rice bags on its seats. The craft flew above the river for around 10 minutes at a height of around 36 metres, reaching speeds of up to 50 kms an hour. South Korea is investing up to USD22 million during the next few years to develop its so-called K-Drone System. The country plans to launch a commercial drone service by 2025. According to Bill Choi, Ehang’s Asia business head, “When the Ehang 216 passenger flying taxi battery is fully charged, the craft can fly for as long as 30 minutes.” The company’s drones are already in use in China, for deliveries, firefighting and tourist flights.

Research company, McKinsey & Co. estimates the potential market size for drones could touch USD46 billion in the U.S. alone by 2026. In Japan, it could hit around USD20 billion by 2025. South Korea estimates its own market for such aerial vehicles will be about 13 trillion won by 2040. Today’s event was part of a series of ongoing tests of unmanned drone taxis and drone deliveries aimed at easing urban traffic congestion in South Korea.

Seo Jeong Seok, Deputy Director at the newly created department overseeing drones in South Korea’s Transport Ministry, commented, “Initially,  the plan is for flying taxis to be controlled by a human on-board pilot and will look more like small helicopters.”