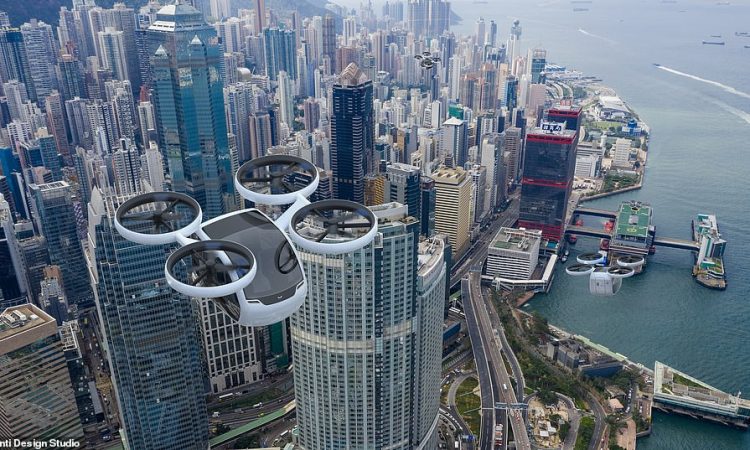 An Italian designer has shared concept images for an autonomous air taxi vehicle called the KITE. The private jet-like craft is designed to carry up to four passengers, sitting in single seats with soft fabric and leather cushions, flies using four double-helix rotors and features a pair of LED headlights to help with landing and low-altitude flying, reports robbreport.co.uk.

There is storage space under and behind each of the seats, along with screens that provide travel data. The craft may be used in China’s Greater Bay Area that is presently under travel restrictions due to Covid-19. The Bay area consists of nine  cities and two special administrative regions. Designer, Andrea Ponti, chose the name The KITE as a reference to the blackbird from the Hong Kong region. The black kite is a bird of prey that is fast, agile and intelligent – all things the Kite flying taxi aims to be. However, unlike the feathered creature, the autonomous drone is fully electric with zero-emissions and sports a number of cutting-edge features.

Passengers access the cabin through a single rear door and walk down the short aisle to one of the four seats inside, which recline and feature a polycarbonate shell. Each seat also has its own four-point quick-release safety harness and retractable trays that allow commuters to do work or enjoy a snack before arriving at the office.

There is also under-seat storage space for riders to stow away items such as briefcases and back of the seat storage provides space for larger luggage. The cabin is equipped with two large screens at the front and two smaller ones on the back of the front-row seats that display flight information, such as duration and takeoff and landing data. The fuselage has a rounded and compact design that Ponti says minimises drag and optimises maneuverability during flight. “Its interior layout recalls a private jet, with a central aisle and one line of seats on either side,” he says. “In this transition phase when air travel has decreased significantly, KITE offers a new option for inter-city transit within the Greater Bay Area.”

Ponti adds, “KITE also embodies the innovative drive of this up-and-coming region and it promotes the advancement of scientific and technological research, not only in Hong Kong and the Greater Bay Area, but in all of Asia.”

KITE would land on docks around the area and wait to recharge before taking off for its next flight. Cost for the trips has not yet been revealed.