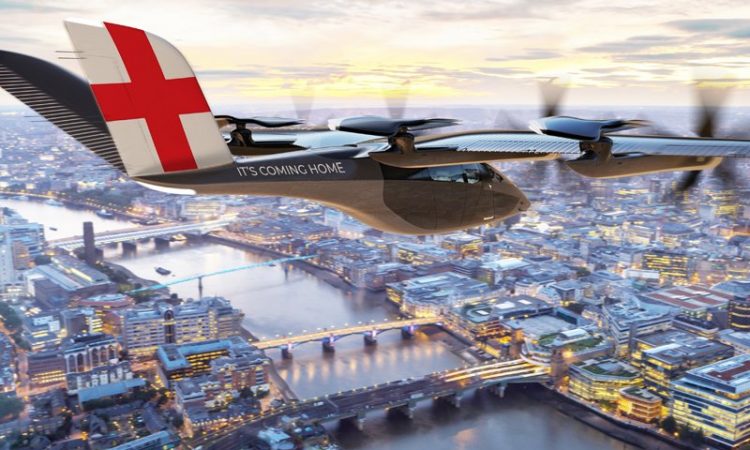 UK-based Vertical Aerospace (VA), announced this week a partnership with Heathrow Airport to investigate how Vertical’s VA-X4 electric vertical take-off and landing (eVTOL) vehicle can operate from Heathrow by the mid-2020s, reports a press release.

The releases says, “Both parties will work closely to explore how this new technology can fit into existing operations at the airport, build understanding of the regulatory changes that would be required, maximise potential job opportunities and minimise any potential impacts on communities surrounding the airport.” VA’s piloted aircraft will be able and quietly, to transport four passengers from Heathrow to the City of London in 12 minutes, with speeds of up to 200 mph, at, claim the company, a cost similar to a road taxi. Virgin Atlantic recently announced a partnership with VA for the UK launch of an eVTOL network alongside pre-order options for up to 150 VA-X4s.

The release continues, “By working together, Vertical and Heathrow expect to help Britain maintain its leading position in sustainable aviation technologies and support moves to a low carbon economy to help meet the Government’s net zero ambitions to make the UK net zero by 2050.”

Stephen Fitzpatrick, CEO and Founder of Vertical, commented, “Vertical continues to partner with world leading organisations such as Rolls-Royce, Honeywell, American Airlines, Virgin Atlantic, Bristow Group and Microsoft. This partnership is a big step forward as we try to get the UK to Net Zero by 2050.”

He continued, “This announcement marks the start of an exciting relationship that will help make eVTOLs flying from Heathrow by the mid-2020s a reality.” Chris Annetts, Chief Strategy Officer of Heathrow, added, “This emerging technology has the potential to reduce congestion and pollution on local roads, while providing passengers with a best-in-class experience on the cutting edge of modern technology. We look forward to exploring the possibilities of zero-emissions flight together.”

VA sits pretty as it presently has the largest conditional pre-order book in the eVTOL industry, of up to 1,350 aircraft worth USD5.4bn. Vertical’s aircraft aims to be “an industry leader in safety, being on track to be certified to the highest global standards and matching the safety performance of airline passenger jets.”

Shai Weiss, CEO of Virgin Atlantic, remarked, “News of the partnership is an exciting next step on the pathway to creating the infrastructure needed to support eVTOL operations at our Heathrow hub.  We look forward to working closely with both Vertical and Heathrow to transform the first and last 100-mile journey of passengers travelling through the Airport.”

The above news story follows on from another last week, where VA released a White Paper entitled The Future of Advanced Aerial Mobility (AAM).

The Paper highlights the economic and environmental benefits of eVTOLs where Government statistics show that this AAM market “will lift UK GDP by 1.8 percent by 2030 and with 88 percent of the UK’s aerospace jobs located out of London and the South East of England, this is a country-wide levelling up opportunity.” Vertical Aerospace is calling for:-

: A commitment for electric flight to be possible across the UK by 2025.

: A commitment from the Department for Transport and the Civil Aviation.

: Authority to deliver a safe operating framework by 2024, to allow commercial electric flights above London, Glasgow, Belfast, Manchester, Liverpool, Cardiff, Bristol and other UK cities. This would include a route to aircraft certification, and reforms to airspace management, aviation security and flight access for electric flight operations, as well as frameworks for certifying, regulating and licensing vertiports, charging infrastructure and pilots.

: Incentivising and supporting the construction of electric aircraft assembly and gigafactories in UK regions by 2024 to allow this emerging sustainable aviation industry to establish itself in the UK.

The White Paper discusses likely eVTOL flight routes, such as the cross-Pennine Northern Powerhouse corridor of Liverpool to Hull which is expected to cut the two-and-a-half-hour drive or three-hour train journey to a 50-minute hop. The Paper explains how the hour-and-a-half drive or near two-hour train trip from Cambridge, the heart of Britain’s high-tech industry, to Heathrow Airport is expected to be a 28-minute flight in the VA-X4, for an estimated UKP58 per passenger. Stephen Fitzpatrick, CEO and Founder of Vertical, explained, “The UK has an opportunity to be at the forefront of electric flight and the clear benefits it will bring in improving connectivity, productivity and creating highly-skilled jobs whilst lowering both congestion and carbon emissions.” Adding,  “The UK needs to act now to grasp this prize. Our white paper seeks to engage those stakeholders that can be a part of our electric air mobility future.”