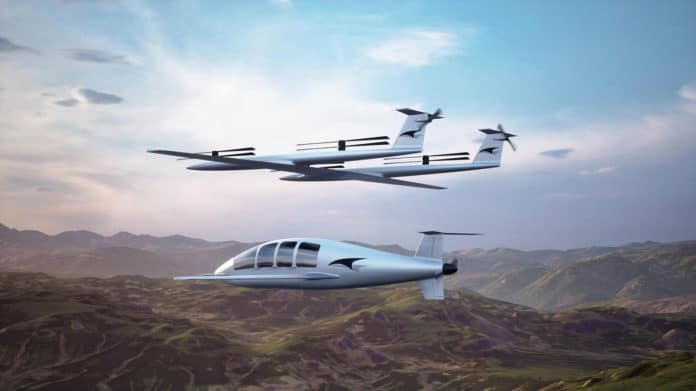 Talyn Air is offering a twist to the emerging eVTOL and VTOL air taxi market, reports inceptivemind.com. The U.S start-up, founded by two ex-SpaceX Falcon 9 engineers, has unveiled a two-stage air taxi that has a new approach.

The complete aircraft takes off vertically, transitions to forward flight, and then separates into two parts. The vehicle responsible for vertical take-off and landing returns to the take-off pad, while the aircraft itself continues to fly with 100 percent battery intact. It will then do a mid-air docking with another VTOL vehicle at the destination and makes a gentle vertical descent (see video). Instead of landing at an airport in the suburbs with a long commute ahead, passengers arrive at a centrally located helipad or vertiport. Talyn Air’s system has eight large rotors mounted in four coaxial pairs. It can carry five passengers more than 483 km at 322 km/h and with its detachable section, the company says it can fly farther and faster than its main competitors.

Surprisingly, at such an early stage of trialling, both the US Navy and Air Force are already showing interest and have offered the start-up contracts for the craft’s development and construction. It is expected that work on military commitments will be completed by 2022. Talyn Air is also focused on the civilian passenger market.