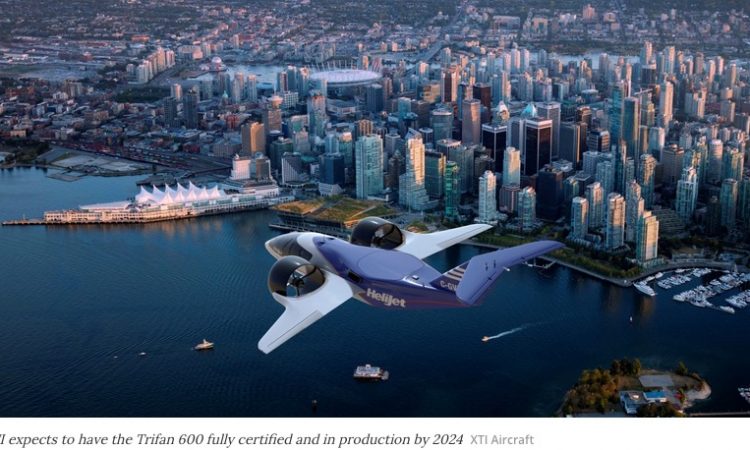 XTI Aircraft is rapidly developing production of its Trifan 600 hybrid VTOL, describing it as “the fastest and longest-range VTOL in the world,” with certification and the start of full-scale production expected by the end of 2024, reports newatlas.com. The Trifan 600 will fly up to eight passengers, helipad to helipad, at ranges up to 750 miles and speeds of 345 mph.

These impressive figures could dominate the electric VTOL space as the range alone is seven times higher than what most urban eVTOLs promise, but then XTI isn’t a pure eVTOL.

Instead of a simple battery-electric powertrain, it runs a hybrid system, using high-powered batteries to manage take-off and landing, but running a GE catalyst turboprop engine as a range-extending generator to deliver its enormous mile-length figure. Meanwhile, XTI has recently entered a joint venture with new aerospace holding and operating company Xeriant, with a view to getting this craft certified and into production and service.

Recent UAMN Article on this Subject:

Bob LaBelle, XTI Aircraft CEO, commented during a launch event at the Wings Over the Rockies Air and Space Museum in Denver, Colorado, “We feel like the initiation of this relationship puts us on the road to certification. We’re very confident we’ll be the first commercial long-range, fixed-wing VTOL. The market has been waiting for this for a long time.”

While the Trifan 600 looks very similar to a traditional fixed-wing design, it’s capable of vertical takeoff thanks to a pair of huge, tilting ducted fans on the leading edges of its wings, and a third ducted fan in the body of the aircraft behind the cabin, which is covered over during horizontal flight to reduce drag. It’ll be straight-forward to fly, running on an electronically controlled fly-by-wire system that manages the electric motors, thrust vectoring and control surfaces in response to pilot commands.

If a runway is available, It makes sense to use it as this can nearly double the range to 1,380 miles if you take off and land conventionally. Yet, even without runways, this is a “killer piece of kit” in the jet market business, flying rooftop to rooftop from LA to San Francisco, or London to Berlin “without so much a drop of perspiration.” Starting at USD6.5 million a unit (which seats one pilot and five passengers), it’s priced extremely competitively for a business market in which the less capable Gulfstream G500 series is currently the biggest seller at USD44 million.

Also, the XTI can claim USD1.3 billion in sales and a backlog of 202 aircraft to build at this point, with 40 of these being non-refundable purchase orders, 122 being refundable deposits and 40 being purchase options.

Of course, without certification, the craft is a non-starter. LaBelle continued, “One of the big things I’d like to emphasise is that we don’t need a whole new set of regulations to fly this. We’re gonna certify under currently-available FAA regulations. And we also don’t need charging infrastructure, or new runways, we can operate perfectly within the current national airspace system of this country or any other country.”

The present plan is to get a full-scale test aircraft built and flying in 2022, with FAA type certification slated for 2024 and production to begin once that’s been achieved. The XTI team boasts a number of highly experienced aviation industry executives, LaBelle being the former Chairman and CEO of AgustaWestland America and COO, Charlie Johnson, being the former President and CEO of Cessna, to name just two examples. Between them and other members of the team, they’ve overseen around 35 type certifications. The Xeriant/XTI joint venture will be called Eco-Aero, alluding to a future in which the Trifan will shift from hybrid propulsion to full battery power or hydrogen fuel-cell use. Ownership is to be split 50/50 between the two companies, and Xeriant will invest some USD10 million over the next year to accelerate development.