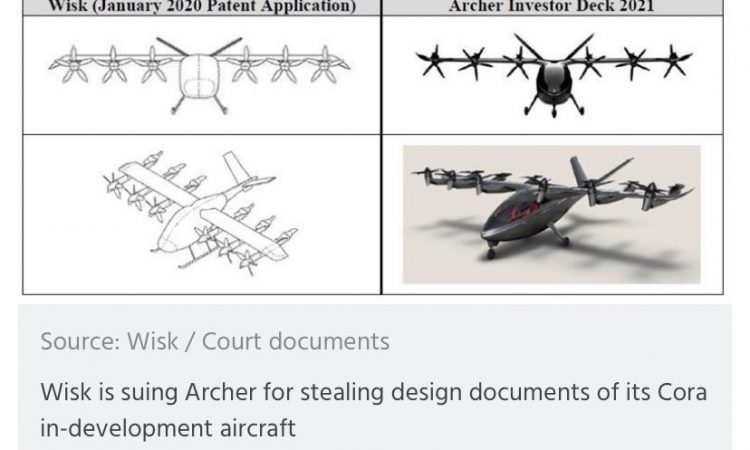 Wisk, the eVTOL start-up backed by Boeing and Google co-founder Larry Page’s Kitty Hawk Corp, filed a motion in a Californian court this week, asking to stop “the alleged use of its trade secrets by rival Archer” and said “it was cooperating with a criminal U.S probe.”

It specifies a list of asserted trade secrets that are redacted from public records, but which relate to critical elements of Archer’s aircraft, systems, and component designs, as well as manufacturing processes and test data. It further requests expedited discovery in Wisk’s civil case against Archer for theft of trade secrets and patent infringement. A Wisk spokesman told eVTOL.com via an email that, “The theft of our highly confidential files, the virtual copy of Wisk’s design from a confidential patent application, and Archer’s startlingly short operational history make clear that Archer’s program is built on Wisk’s intellectual property, as we outlined in our complaint.”

Since the allegations first surfaced in early April, potential investors have been spooked by what could be a damaging litigation suit for the eVTOL industry as a whole. Espionage and the stealing of technology secrets along with patent infringement from a rival is nothing new, but given the nascent nature of this industry and the importance of attracting investment for it to develop, there is nothing worse than two leading rivals fighting it out in court and potentially airing “their dirty linen.”

Meanwhile, a Wisk spokesman said the company continues to cooperate with the FBI and U.S. Department of Justice “on their criminal investigation into Archer relating to the theft and use of Wisk’s intellectual property.” An Archer spokeswoman has retorted, “This (is) a baseless motion in a baseless lawsuit,” adding that the company is moving forward with its business plans, “including the development, certification and production of its proprietary aircraft.” Asked about the criminal probe, she said: “We have no further comment on the specifics of the investigation at this time.”

Wisk’s motion for a preliminary injunction and hearing is penned in for July 7th. How Archer will respond is unclear, but “a damage limitation exercise” is vital given the company is preparing to float on the stock market via a Special Purpose Acquisition Company (SPAC) with Crest Investment whose major investors include United Airlines.