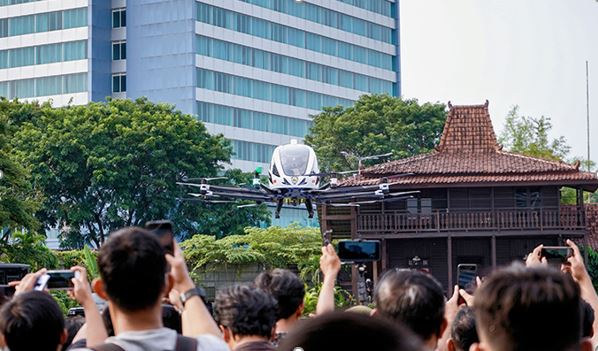 EHang Holdings Limited reports today that it has received a pre-order for 100 units of EH216 autonomous air vehicles (AAVs) from Prestige Aviation, an Indonesian aviation company and a subsidiary of Prestige Corp.

The company says: “It’s the largest pre-order EHang has received so far for its passenger-grade AAVs in Asia. Prestige Aviation previously purchased one unit of EH216 from EHang, and the two parties jointly conducted a debut flight demonstration for aerial sightseeing in Bali, Indonesia in 2021.”

According to Bambang Soesatyo, Chairman of the People’s Consultative Assembly Republic Indonesia, attended the signing ceremony at the Indonesia International Motor Show 2022 (IIMS 2022) where the order was announced: “I am pleased to witness further reinforcement of collaboration between Prestige and EHang as well as their joint efforts to promote a broader application of solutions to Urban Air Mobility (“UAM”) to the Indonesian market. Coming next, we hope to explore more possibilities to facilitate the implementation of UAM in Indonesia, and to seek breakthroughs in infrastructure, airworthiness certification, and other related fields.”