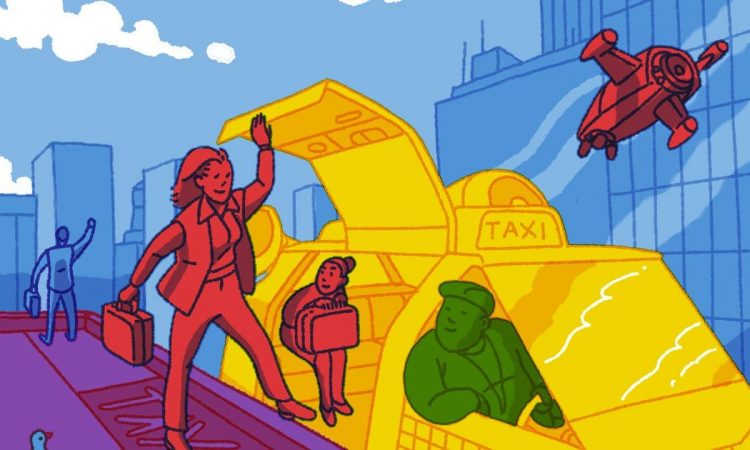 The first problem with the ft.com feature, published this week, is that it hides behind a paywall, so many won’t be able to read it. The other problem is that the newspaper doesn’t like its articles being copied and then spread around the internet – not even with a source mention. So, below is an article critique. The eVTOL feature is written via a special relationship between London-based journalist Sylvia Pfiefer and San Francisco’s Patrick McGee. First irritation: Why has the phrase “Air Taxis” in the heading (good), then revert to that hackneyed chestnut “Flying Cars” (bad) in the opening paragraph? What follows is the expected comparison with science fiction, although at least The Jetsons is not mentioned and instead Ridley Scott’s film Blade Runner which is a more hip analogy.

Money is then brought into the article with phrases like “billions pour into urban air mobility”, “Investors… pumping more than USD 7bn into such projects,” while the recent courageous (some suggest outrageous) call from Morgan Stanley is cited, “…a market expected to be worth USD1.5 trillion.” For, the more noughts forecast from a respected financial institution, the more credence you give a new industry.

Company of the moment, Wisk Aero, alongside Airbus, Embraer, Volocopter and the other usual suspects are briefly mentioned alongside the kooky phrase, “Some experts worry the nascent industry is getting out over its skis.” Has one of the journos been on a recent holiday to St Moritz?

A required article balance unfurls with various concerns and questions: “…big challenges still need to be addressed, such as certification by aviation regulators, the development of ground infrastructure and public acceptance.” Marc Ausman from the aircraft company, Airflow.aero, is then quoted with a puzzling, “When you move fast and break things, safety is tossed aside — that doesn’t apply well to aerospace.” He continues, “You can’t just come in, disrupt the industry and then apologise to regulators later on.”

A skip and a hop and the feature returns to the positive side. “LEK Consulting estimates that the “advanced air mobility” industry could account for 50 percent of taxi or ride-share journeys greater than 15km by 2040.” Yet, this is the second time inverted commas are used around the phrase “advanced air mobility”. Why? While the “special relationship” returns to quoting research experts to offer further credence to the feature.

Lukasz Gadowski, one of the unsung heroes of the eVTOL world, who has financially backed a number of start-up companies including China’s AutoFlight, is rightly mentioned. He is quoted, “(Flying taxis) can eventually solve problems for cities, for authorities, for governments and for the environment. If the most efficient way of taking care of people is within cities and the growth of cities is limited by public sector infrastructure, [then] this is not a cure all but this is one of the tools to alleviate that.” After an utterance of Joby Aviation, attention turns to Archer and company major investor, Marc Lore, who pushes back against the idea that certification is impossible to achieve within the next few years. “There are already regulations in place to be able to fly helicopters from heliport to heliport,” he points out. “And one way to think about eVTOLs is democratising access to helicopters for the masses — but safer, cheaper, more environmentally friendly and with less noise.”

Michael Spellacy, CEO of Atlas Crest, the SPAC company that merged with Archer for its recent market floatation, agrees. “The timelines are realistic and clear because the FAA [US regulator the Federal Aviation Administration] wants to make this happen. United Airlines, which has placed a USD1bn order for future Archer aircraft, wants to make it happen. You’ve got commercially viable technology right now. This is not about dreaming into the future.” There you have it. If Big Business wants the eVTOL industry to happen, “Make it so!”

The feature begins to wind down. “Industry experts say it is still too early to pick winners among the 600 plus designs, given the different technologies being trialled.” There is that emphasis on experts again.

A brief reference to Kittyhawk, a quick look at air regulator EASA and then for EHang aficionados, a grudging (perhaps?) acceptance of the company’s presence. All of… wait for it… two paragraphs which initially discusses certification and the possibility of gaining approval from the Chinese regulator, CAAC, “as early as this year”.

Andreas Perotti, EHang’s CEO for Europe, is then quoted re: vertiports.  “Nobody will build a vertiport for only one vehicle or one category. It has to be agnostic to a certain extent when it comes to things like weight, the space available.” Then brief quotes from Florian Reuter (Volocopter) and Stephan Baur (Roland Berger) who return to the timescale of air certification, before the expected and final dispiriting paragraph, where Airflow’s Marc Ausman returns.

“Aerospace innovation is just longer and more costly than most people think, and applying a tech mentality to aerospace — well, that just really doesn’t sync very well together.”