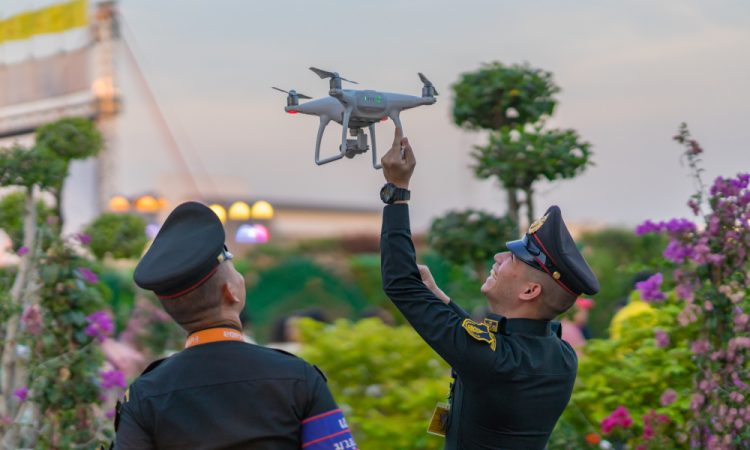 At the start of May a French judge ruled in favour of allowing the Interior Ministry to continue to use drones to monitor COVID-19 lockdown measures and against the French League of Human Rights (La Ligue des droits de l’Homme) and the Quadrature du Net, who had filed a lawsuit claiming the images collected violate privacy regulations.

After an appeal to the High Court, on May 18th this was overruled by top French judges who stated the police use of drones to help contain the spread of the virus “constitutes a serious and manifestly unlawful infringement of privacy rights.”

The Paris-based Conseil d’Etat ruled that drones with cameras can no longer be deployed until the concerns are addressed, either via a privacy-friendly law or by equipping the craft with technology that makes it impossible to identify the people filmed.

Since the outbreak of COVID-19, drones have frequently appeared in the world media. From stories about delivering medicines to the sick, flying coronavirus test samples to hospitals, distributing foods and general necessities to those living in more remote areas, to videos of drones reminding the public during lockdown to social distance and remain indoors via loudspeaker – or monitoring people who might harbour the virus, or disinfecting public spaces and sports stadiums. Some industry experts suggest the pandemic has been the making of drones, showing the world their potential for human good.

However, there is a darker side. For some, drones are being deployed to erode privacy laws and human rights. Silkie Carlo, Director of UKs ‘Big Brother Watch’, was quoted in the UK’s Times newspaper: “Drones are an extreme, militaristic form of surveillance. We’ve seen too many examples of police using them aggressively in place of measured public health communications…Police using drones to surveil and bark orders at members of the public is usually excessive and counterproductive. Parliament should introduce stronger safeguards to circumscribe their use.”

When a loudspeaker is attached to a drone, it can be seemingly transformed from an innocuous flying toy to something more sinister. The ensuing pandemic and much of the world going into lockdown has given greater powers to the police and governments and previous clearly-drawn lines around privacy and security are starting to become blurred. Whether it is the Philippine President Rodrigo Duterte reported to have ordered a “shoot to kill” policy to his police force on anyone breaking the lockdown laws in Manila or Italian mayors reportedly threatening to use flamethrowers on those holding parties there is a danger, drones may soon become associated with more draconian government responses to enforcing “stay-at-home” laws. One of the earliest, iconic images of drones being used in COVID-19 responses, is the video in China of one hovering above an elderly woman in the street, who then looks up and is startled to see this small flying craft barking out a warning message, ordering her to immediately return home.

In response to a video shown in the UK in March of police filming ramblers and dog walkers in the Peak District, and then posting the film with critical captions on Twitter, Lord Sumption, a former supreme court justice, heavily criticised the police stating that such actions risk plunging Britain into a “police state”. He warned that police had no legal power to enforce “ministers’ wishes”, that the public should not be “resigning their liberty” to over-zealous citizens in uniform, and it was “frankly disgraceful behaviour”, adding that the force had “shamed our policing traditions” and turned themselves “into glorified school prefects”.

According to Silkie Carlo: “The idea of using drones for surveillance has fallen between the cracks of law and regulation for some time. In the present circumstances, parts of the policing and surveillance toolkit are ripe for overuse and misapplication… the surveillance system was already creeping.” Adding, “The means of accountability we would normally use have basically been shut down.”

So far, there has been a general acceptance in many parts of the world that the lockdown measures taken by governments – including the use of drones – is broadly proportionate to the scale of the problem. La Quadrature du Net’s complaint hinged on concerns that Parisians are being filmed by ‘a squadron of drones’ without their knowledge and with no limits on how long footage can be kept. “If the police intended to take advantage of the health crisis to test new gadgets, they got things wrong,” the Association said before the verdict was announced. “… history shows that measures taken during times of emergency tend to stay in place,” said the Association’s lawyer, Alexis Fitzjean. This key question of whether and how drones will continue to be used for surveillance activities by governments after lockdown measures are relieved is a complex one. Although, the French High Court decision shows that the law of privacy, even amidst a world pandemic crisis, remains robust and offers hope to other countries where individual rights are upheld.

Urban Air Mobility News reported on 22 April (‘Draganfly conduct first US test flights of its “pandemic drones”) that this Canadian drone company had been trialling drones with the Westport, Connecticut police force for five days. The craft are fitted with sensors and computer vision systems that measure body temperature, breathing, and heart rates from up to 190 feet. These “pandemic drones” can also spot if someone is sneezing, coughing, or following social distancing rules. Westport Police Lieutenant Anthony Prezioso told local news outlet, Patch: “It is anticipated that this will continue to be in effect through the summer months of July and August as we anticipate the need to continue to work to reinforce social distancing measures in order to limit and control the spread of the coronavirus.”

There was an immediate outcry from both the public and media over a perceived breach of privacy, even when Draganfly CEO Cameron Chell stated, “The system does not collect individualised data. The system does not identify people. The system only takes population samples and provides this anonymised data to our public safety officials.” Westport police, under public pressure, ended the trial.

Venturebeat (VB), a US technology website, interviewed Chell. He said, “The community had a bit of an outcry. They were worried about Big Brother. And, fair enough…Yet, on the social distancing aspect, we have been, quite frankly, inundated with requests from other jurisdictions that want to move forward with pilots or at least understand the pilot. We’ve had some great discussions where the usual first question is: ‘Does this invade privacy?’ Once they’ve carried out that due diligence, as Westport did, they clearly understand that it does not.”

When asked the question by VB, ‘Why do you think there is still demand given the first pilot ended so quickly?’ Chell replied. “They’re interested to move forward with trials because the underlying issue here, is the greater liability for public officials. As they authorise their towns to reopen, if the people get sick again and they haven’t taken proactive steps [such as measuring] and social distancing, or discovering where hotspots emerged, that is their biggest issue.”

This poses a disturbing question. If the pandemic lasts longer than anticipated or worse, returns after lockdown measures ease, forcing a new lockdown to take place, even the countries who uphold privacy and human rights laws most ardently may be forced to adopt new more stringent measures and prolong their use of drones for surveillance – aligning in the minds of many of the public the use of drones and a loss of privacy.  And it is not just governments who may have to adopt more drones for further surveillance roles.

According to Chell in the VB interview: “On the private side, enquiries have been even more prolific. We’ve had queries from airports and convention centres to casino operators and theme parks. They’re all worried and concerned about how they reopen? Everyone is asking what will the world look like post COVID-19? How do I track people returning to my theme park, what data do I have to report, and what are my liabilities now they’re inside?”  For private organisations, the requirement for drone surveillance systems is also being driven by the need to put in place and record social distancing measures.

“…The casinos are concerned about attracting people back, because they’re very worried about employees that are returning to their premises. For if these people are the source of an infection hotspot, then what’s the liability they face? The same applies for a large crowd entering a conference or convention hall. In such cases, I can see drones like ours at Draganfly, possessing all the essential health monitoring tools required, being widely used.”

Much will depend on the next stage of the pandemic’s evolution and government responses to a second or even possible third wave and exactly how the post-COVID 19 world will look. While there are a thousand great stories to tell about drones saving lives and delivering vital supplies, the industry will need to be aware that increasing use does not automatically equate to increasing popularity and that drawing clear lines between acceptable and unacceptable surveillance missions – lines based on legal and community support – is now more vital than ever.

Chris Stonor writes on business and futurism for a wide range of national and international journals for public and niche market audiences. He is a regular contributor to www.urbanairmobilitynews.com.