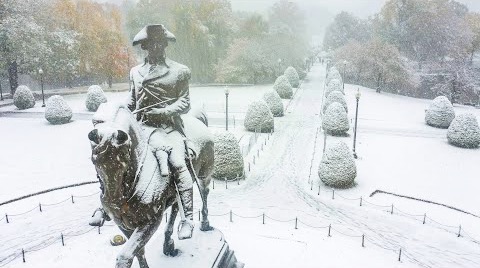 First, it was drone footage that graphically depicted cities around the world, eerily quiet and devoid of people and transport, during the height of the previous pandemic lockdown. Not forgetting the macabre drone film of cruise liner elephant graveyards within world ports, as the ships lie dying and dormant, as the market loses USD1 billion a month from lost business.

Now it is more moody and less traumatic, as winter comes to America, where drone footage can offer the magic and beauty of a beautiful snow city landscape, reports boston.com.

Below is footage taken last Friday of U.S. Boston’s first winter snowfall. The videographer, Jovan Tanasijevic, co-founder and director of Above Summit, a Somerville-based production company that specialises in drone aerial cinematography, said, “It felt like a very quiet, slow day. It just felt like the city kind of really came to a stop. I think the people that I saw out there were trying to enjoy that kind of magic of winter.”