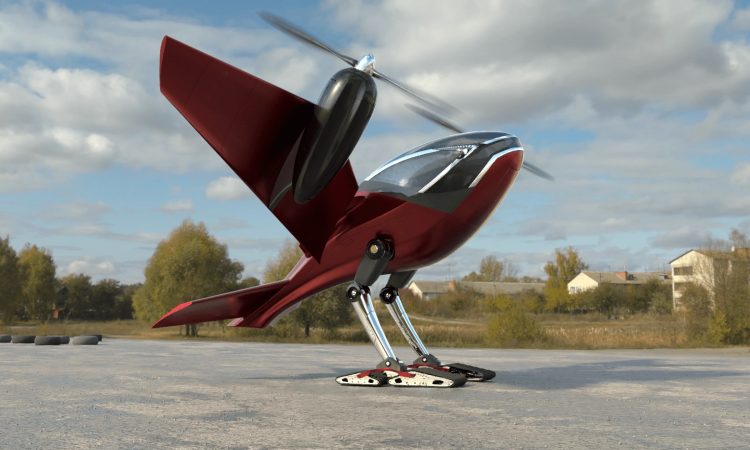 Africa has come along with a unique eVTOL concept described as a NVTOL, reports newatlas.com. Called an All-Electric Phractyl Mabrobat-Birdoplane, as the images show, this is a feathered-like creation with tracked feet, bird legs that squat back, tilts its cabin and wings skywards and performs near vertical take-off and landing (NVTOL).

Phractyl, the company behind this “avant-garde” creation, says due to a lack of ground transport infrastructure in many areas of the Continent, this concept resolves the problem. The craft can take off and land vertically without needing runways or helipads, or carrying the high costs of helicopters. For example, the tracked feet and no wheels offers this craft easy multi-terrain capabilities. The bird-like legs can lift, lower, balance and tilt the body of the plane. When it’s time for take-off, it rises up to its maximum height, tilts back as far as the tail will allow (close to 45 degrees) and tilts its wings back even further, so that the large props on the wings are angled upwards to about 20 degrees off vertical.

The result is somewhere in-between a tail sitter and a tilt wing. The Macrobat will creep forward as it takes off, hence the “near VTOL” designation Phractyl has invented for it. Once aloft, the legs fold up and out of the way to minimise drag and then level out into cruise flight and behave much like a small plane.

The bird legs may be able to help cushion the landing, but there is a  great need to slow down this Birdoplane as much as possible before touch down. The technology required for such a balancing escapade is essential. This initial concept seems to be a single-seater, claiming a 93-mile range, carrying a maximum 330 lb payload and traveling at speeds up to 112 mph. Phractyl says it could be piloted or remote-piloted, carrying a passenger or cargo as required. A larger air taxi-style version is “envisioned” at this point as well. Initial applications, says Phractyl, might include recreational flight, EMT, medical deliveries, cargo missions, infrastructure inspection and even crop spraying.

At this point, you do wonder whether you’re looking at an April Fool, but the company is quite serious about its concept and design. Has there ever been such “a far-out and whacky” eVTOL yet? Phractyl’s Founder, Vivek Singh, states on the net, “If you are prepared to subject yourself to six minutes of uncoordinated jazz, here is a link to a video about us, and what we are working towards.” He continues, “The video is very much focused at a South African/African audience, but I think that you might find it at least partially entertaining.”

All that jazz, it may be, but as newatlas writes, “I’d be derelict in my duties to you, dear readers, if I neglected to add that the video is entirely narrated as a rhyming poem of indeterminate meter, or that the Macrobat itself doesn’t show up until after the three minute mark, or that the tone of the thing, much like the design of the plane, manages to leave us completely mystified about whether the whole thing’s a serious project or not.”

Adding, “Let me just say that in a perfect world, this thing would be able to land on power lines, then ruffle its wings and drop its cargo or removable battery packs out a hatch in the back. Due diligence complete, I leave you with the video. Make of it what you will!”