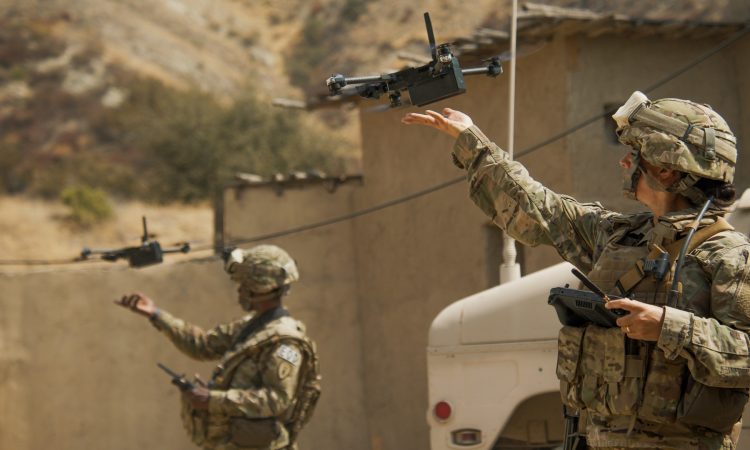 California U.S-based drone company, Skydio, best known for manufacturing and marketing its products to the general consumer market, is poised to sell its craft to the U.S. Army, reports defensenews.com.

The military has chosen Skydio to continue trials in a final prototyping phase, which should lead to the company supplying the service’s first tranche of short-range reconnaissance (SRR) systems unmanned craft. The SRR craft is a small quadcopter that can provide enhanced situational awareness. This concept is a spin-off from the Army’s earlier efforts to develop a rucksack-portable version.

The Skydio X2D SSR system is one of six SRR prototypes the military has been evaluating. Two systems are now to be trialled further by the Army Test and Evaluation Command. A spokesman commented, “Based on data from these tests the Army selected the Skydio system to remain in the prototyping phase.” The military will now evaluate Skydio’s final prototype in early April. Once the follow-on evaluation has been successfully completed, the Army will request approval from the Program Executive Office Aviation to enter into production with the company for the first tranche of systems. The spokesman continued, “Once approved for production, the Army will begin deploying the drone in the field within 90 days.”

The overall acquisition strategy is to conduct a series of three competitive tranches. The first will be fielded to approximately one third of the Army’s SRR requirement. Competitive prototype evaluation for the second tranche is expected to begin later this year.

Adam Bry, Skydio’s CEO, said, “We are proud to have been selected by the U.S. military for the final integration in the SRR program and is a testament to the breakthrough capabilities of the Skydio X2D and our team.” Adding, “The Army has done incredible work to ensure our soldiers have access to cutting edge drone technology.” According to a company statement, Skydio’s X2D comes with “the world’s leading AI-driven flight autonomy software.” It is a foldable and portable system “that leverages hyper-strength composites to withstand the most demanding environments.” The craft comes with a colour FLIR thermal sensor and a GPS-based night flight capability and strobe lighting. It can also fly for up to 35 minutes on a single battery.

In August 2020, the Pentagon’s Defense Innovation Unit chose five American-manufactured drone companies as partners. These are Altavian, Parrot, Skydio, Teal and Vantage Robotics. The craft available to the Pentagon through the program must have an ability to be assembled in two minutes or less, have an operational range of over 3 kilometres, flight endurance greater than 30 minutes and can fly through dust and rain as well as other degraded environments.

It appears the line between small consumer-type drones and military usage is becoming ever finer.