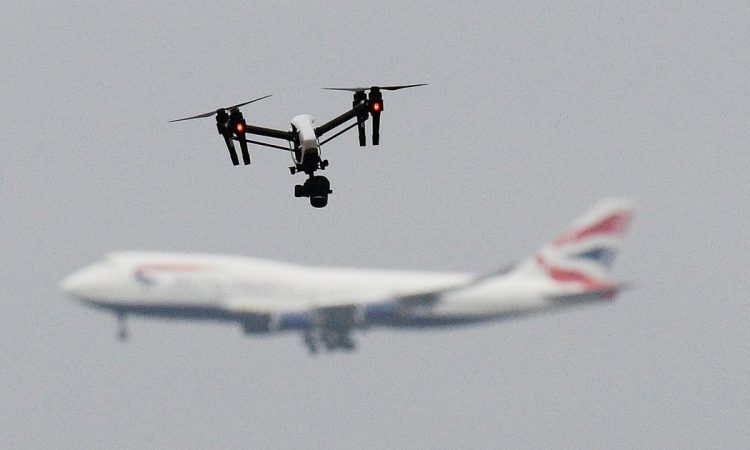 The Daily Telegraph in a trumpeted ‘Exclusive’ says the UK Government is discussing plans for entanglement devices looking more like “Spiderman webs” to be employed to prevent another catastrophic drone incident like the one at Gatwick in December 2018.

“Spiderman-style webs fired at drones to bring them crashing to the ground are at the centre of Government plans to prevent another Gatwick Airport attack”, says the Telegraph. It goes on, “Plans for ‘entanglement devices’, featuring tassels that paralyse rotas and can be deployed in falling clouds over “drone swarms” have been submitted as a patent by Ben Wallace, the Defence Secretary.”

Although Wallace warned then that those putting lives at risk by flying drones near airports would face “the most severe sentences”, he did not explain the methods that could be deployed to bring the craft down. But an MoD patent application filed with the Intellectual Property Office and seen by The Telegraph, reveals “a series of new ways to tackle illegal or nuisance drones”. The designs use a “plurality of filaments attached together to form a tassel” that “when deployed … spread apart over a wide area before being pulled into the drone’s propellers, wrapping around them and forcing the drone to land.”

While early designs saw the tassels “knocked away”, this new version means when “one filament is knocked away from a propeller, the remaining filaments are resultantly pulled into the propeller … severely affecting the drone’s ability to manoeuvre or reducing the ability of the drone to generate lift such that it is forced to land or impact the ground.”

The document says tassels could be made from “ripstop” manmade woven fibres, strings or ribbons, and create webs large enough to engulf the entire drone and all its rotas. The lighter the material, the more likely the webs would “float or loiter in the proximity of a drone rather than fall away from its vicinity”. A second element would involve a stealth airborne “intercept vehicle” – or drone – which could fly over a drone swarm before dropping a “payload” of entanglement devices to generate a debris field. A more advanced design is for that “intercept drone”, which drops the devices to be fired toward the offending vehicle before it begins flying to deliver its webs.

But the most ambitious technique is to drop a “plurality of entanglement devices” with numerous “masses, lengths and numbers [of] filaments” so that “some fall faster than others, or are more susceptible to movement in an air stream” maximising the area covered.

These latest methods offer a more conventional approach of ensnaring the devices compared to the more high-tech ways of preventing them entering controlled airspace by interrupting or jamming wireless frequencies to the UAV or by using geo-fencing where virtual or digital boundary is created. It is hoped the latest design could be deployed if and when those high-tech methods fail.