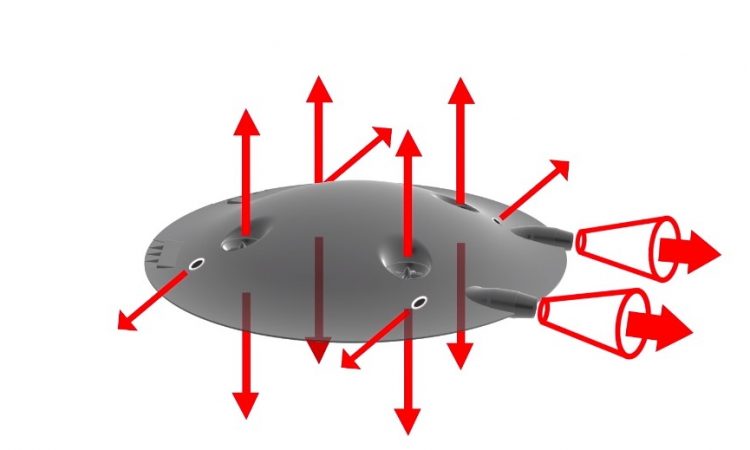 According to Vice, The craft was design and built by engineer Razvan Sabie and aerodynamicist Iosif Taposu and based on the “back cross-section of a dolphin’s airfoil.”

The All-Directional Flying Object, or ADIFO, is the result of more than 20 years of research by the pair.

A video on the team’s web site claims that the flying saucer can “carry out unique maneuvers superior to any known aircraft.”

“The aerodynamics behind this aircraft is the result of more than two decades of work and is very well reasoned in hundreds of pages and confirmed by computer simulations and wind tunnel tests,” Razan Sabie explains. “Operating like a quadcopter, ADIFO handles ‘take-off, landing, and slow speed manoeuvres’ through four ducted fans. A pair of jet engines located at the rear of the flying disc provide horizontal thrust. Sabie says the dual-propulsion system can vector individually, affording the ADIFO a high degree of agility during level flight. Rounding out ADIFO’s unique design are a pair of lateral thrust nozzles located on each side of the disc, which allow the disk to rapidly push itself sideways in either direction, or quickly rotate while in flight,” the article says.

Vice reports that Sabie and Taposu unveiled a 4-foot operational prototype of ADIFO in spring of this year.

Sabie told the publication that a full-scale model of the flying saucer would represent “a new and revolutionary flight paradigm.” Sabie claims the ADIFO’s unusual shape “is ‘natural born’ for supersonic flight.”

He said the design should “reduce shock waves on the disk’s surface” thus preventing the occurrence of sonic booms during transonic flight. He believes the disk will be capable of “sudden lateral transitions and sudden yaw,” in addition to “smooth transitions during subsonic to supersonic flight.”

The current ADIFO prototype, “is a very-very basic model of what we have in mind, the peak of the iceberg,” for what they intend to do.

“Instead of the proposed jet engines, the current ADIFO prototype achieves thrust by using two small electrical fans. Sabie says the next stage of development will involve performing more complex simulations, wind tunnel tests, and developing the control system to demonstrate the disk will be capable of travelling at transonic and supersonic speeds,” Vice reports.

The ADIFO website says the development team is looking for partners.