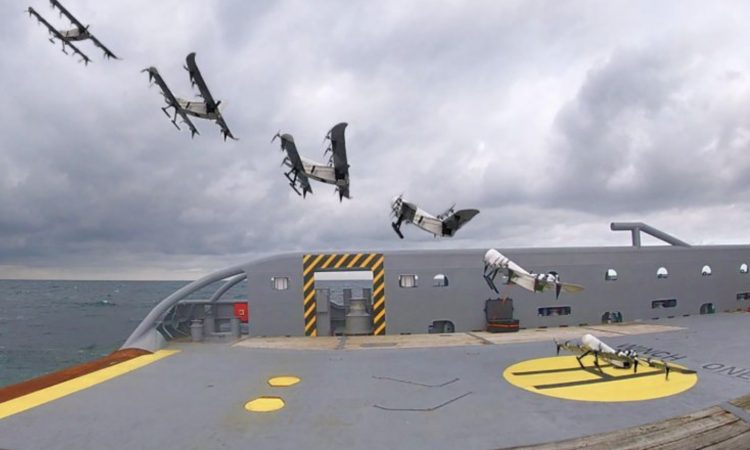 Researchers allied with the Micro Air Vehicle Laboratory (MAVLab) at the Netherlands Technical University in Delft, have successfully conducted a first test flight from a Coast Guard ship with a hybrid hydrogen drone, reports a press release.

This Dutch specialised drone, officially known as the NederDrone, is not only hybrid in its propulsion system, using both batteries and hydrogen, but is also hybrid in its design, combining vertical-take-off-and-landing (VTOL) with a fixed-wing construction for extra distance and longer flight times.

What made the trial so unique is that the excess energy generated by the hydrogen system was used to recharge the drone’s batteries mid-flight. This culminates in a longer flight time. According to the researchers, the test flight is an important step towards making aviation more sustainable.

Bart Remes, project leader of the Micro Aerial Vehicle Lab (MAVLab) at TU Delft, said, “We have developed a hybrid drone that takes off and lands vertically using both hydrogen and a battery. During horizontal flight, hydrogen is used via a fuel cell, which also recharges the battery. During vertical flight and landing, the power then switches to the battery. Due to to the fixed-wing design and the use of hydrogen to recharge the  battery, the drone can remain in flight for many hours.”

The NederDrone which weighs around 29 pounds and has a wingspan of approximately ten feet, is equipped with a 300 bar 6.8-litre carbon composite hydrogen cylinder that supplies electricity to the engines. The cylinder supplies the hydrogen at low pressure to the 800-watt fuel cell, which then converts the hydrogen into electricity. The only emission that is released is oxygen and water vapour.

In addition to the fuel cell that supplies electricity to the engines, is the set of batteries that offers the extra energy for vertical take-off and landing. The drone flies with 12 engines, and can land safely on the aft deck of a ship even in the event of failure of some of the engines.

Henri Werij, Dean of the Faculty of the TU Delft Aerospace Engineering commented, “One of the most important aspects of this research is the hydrogen-power used. This is viewed as a main contender for creating a green, sustainable fuel for aviation. ”

While drones are regularly flown over land, at sea, there are many additional challenges. Examples include wind, saltwater, unpredictable weather, as well as a moving ship with limited possibilities for ascent and landing. And why the NederDrone was not only tested in a wind tunnel, but also from ships of the Royal Netherlands Navy and Coast Guard, sailing on the seas off the Dutch coast.

Due to the combination of the wings and a hydrogen cylinder and battery, the NederDrone was able to remain in the air for more than 3.5 hours during the first test flights. With this durability, the drone can support reconnaissance and inspection tasks.

Captain-lieutenant at sea Pieter Blank, explained, “As an innovator at the Royal Netherlands Navy and Coastguard, introducing new technologies requires a more exploratory approach. For us, they are the future and why we are fully committed to working with others to bring these technologies into operational applications.”