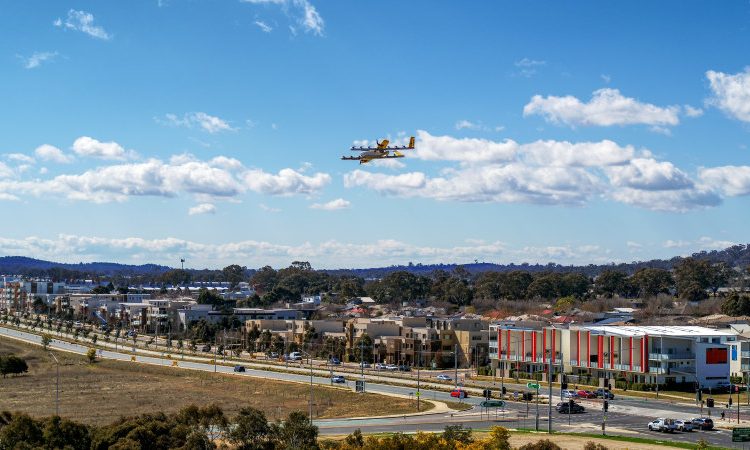 After a highly successful first year delivering food, coffee and general products to the populace of Logan city, a Brisbane metropolitan district in South East Queensland, Australia, Wing are now aiming to expand their service for local “tradies”. (“Tradie” is a nickname for Australia’s respected and well-paid profession of trades people), reports brisbanetimes.com.au.

Wing, which is owned by Google’s parent company Alphabet, launched its delivery service to Logan’s Crestmead and Marsden areas in late 2019, only to find itself in the box-seat when the pandemic lockdown occurred some months later.

While the drones have delivered fresh coffee, toilet paper and even roast chickens to people unable or not allowed to make a sortie to the local shops, it is the hardware supply that Wing are now turning its attention to. Browns Plains Hardware was one of the initial companies to partner with Wing. Manager, Paul Charlton, said he had received good feedback on the service from tradies. “If you’re working on someone’s house and you run out of the right screws, you’ve got to pack up, get to the nearest hardware store and get back, it can take half an hour at least, while we know Wing can do it in seven minutes.”

Jesse Suskin, Wing’s Head of Public Policy, Jesse Suskin, realised early on wasn’t just residents who could use the service. “Even as we were setting up our initial warehouse site, tradies would come by and all would say it would be great to use the service for them. They got really excited by it.”  Today, Wing is looking at expanding the use of its app to tradies working in the suburbs covered by its delivery service.

He continued, “There was a landscape gardener earlier in the year who ran short of whipper-snipper line and called up a drone and the extra line was delivered before he had to go to the next job.” Wing has a central warehouse where it keeps a supply of goods from its retail partners. The products can be loaded on to the drones, although weight is an issue. Nothing more than a kilogram or so.

Presently, users download the Wing app and use it to order and pay for goods, with the drone delivering their item right to their door. To expand to tradies, Wing must alter its app to allow people to request a drone to their current location rather than a registered address.

Charlton believes the demand is there to service door-to-door trades people as well as construction sites. “It’s a little bit frustrating for me that Wing are only doing two or three suburbs, I want them to expand to all of Brisbane, it’s such a great service.”

While the drone company has approval from the Civil Aviation Safety Authority to operate its remote-piloted drones in the Logan suburbs, any expansion would need to be approved by the air safety regulator.

Suskin says the company has plans to increase the neighbouring suburbs, in tandem with the move to expand to other user bases. He comments, “Right now we’re in three suburbs, we just added Berrinba after being in Crestmead and Marsden for some time, but stay tuned on news for expansion, it will happen soon.”