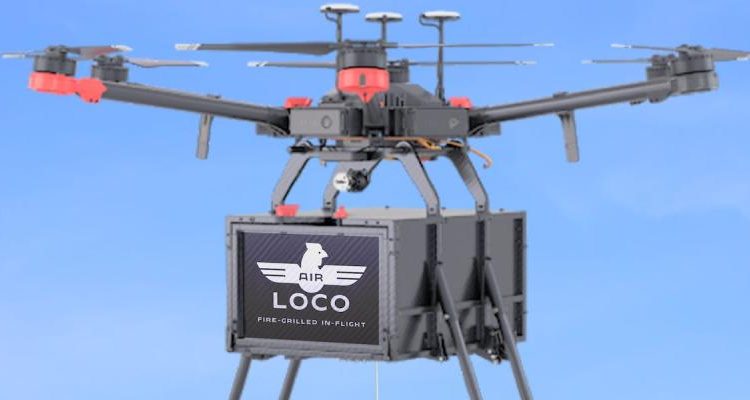 As U.S restaurants and Take Aways find ways of avoiding crippling road delivery fees from companies like DoorDash and GrubHub, El Pollo believes it has found the answer, reports businesshala.com. This Friday the first trial begins at a store in Corona, California with the Flytrex drone delivery service. Later this summer further tests are to take place with over 10 other Californian stores.

Despite the easing of coronavirus restrictions across the US, El Pollo executives believe on-demand delivery will become an essential part of the 480-unit store business.

Andrew Rebhun, VP of digital at El Pollo Loco, pointed out, “It’s no secret that the delivery business model is very challenging for restaurants.” Uber Eats, for example, can charge up to 35 percent in fees per order.

Meanwhile, El Pollo is setting the stage for other fast-food chains to join the drone-delivery bandwagon. Flytrex CEO, Yariv Bash, commented, “On-demand food delivery by drone is clearly on the verge of a turning point. We promise low cost on drops.”

While Amazon’s strategy, for example, revolves around package delivery, Flytrex is focused on delivering on-line grocery and restaurant meal orders within minutes to the suburban backyard. Since 2020, Flytrex has been delivering Frappuccinos and groceries from a Starbucks and a Walmart in Fayetteville, North Carolina. Now it’s eyeing the delivery of fire-grilled chicken from El Pollo Loco.

The partnership with the chain marks a turning point for the company, which has overcome several FAA hurdles to reach this milestone. For Bash, autonomous drone delivery is the perfect solution to on-demand food delivery. He questions the practicality of paying a gig driver to bring you 4 pounds of food or groceries. “It’s just crazy,” he said. “So once drones become a reality, there’s no turning back.” Businesshala.com explains, “Flytrex says drone delivery is faster and more efficient than third-party deliveries made by independent contractors working for Uber Eats, DoorDash and Grubhub. Instead of a gig driver making 2 1/2 deliveries an hour by car, Flytrex said its drones can complete about 10 deliveries at the same time for restaurants at a much lower cost.”

And goes on, “El Polo Loco’s drone service will take about four to six minutes after the order is processed, Rebhun explained. Initially, Flytrex will deliver each of the El Pollo Locos involved in the FAA-approved test to homes close to the store. This El Pollo Loco is adapted to the ordering patterns of the customers. Rebhun said that 80 percent of its delivery orders were made from people who live within 2 miles of a restaurant.”

Thanks to menu innovation, drive-thru service and digital upgrades, El Pollo Loco survived the devastating effects of the pandemic better than most fast-food chains. The company is now gearing up for aggressive expansion in 2021 with two new restaurant designs that meet the growing demands of takeout, drive-thru orders and delivery.

After learning about Flytrex’s business model of on-demand delivery at a fraction of the cost of third-party delivery aggregators, Rebhun took the next step. He asked for a display at a store in Redondo Beach, California.

The Flytrex drone cruises 200 ft in the air at speeds of about 32 mph and can carry up to 6.6 pounds of luggage. The new drones in development will be able to carry 10 pounds, Bash explained.

To mimic a typical family meal order, Rebhun had a Flytrex drone that served a 12-piece chicken meal with sides, four burritos, and a few drinks. The average delivery meal ranges from USD20 to USD30. Once the drone took off from the restaurant, Rebhun followed it to the drop-off zone, which was about 200 ft away. An “X” marks the location where the drone will land. From 80 ft in the air, the drone used a wire-release mechanism to gently lower food inside thermo-to-go packaging with the branding of El Pollo Loco. Rebhun said the drone successfully made its mark, where the food in the bag was hot and intact and the drink did not spill.

An enthusiastic Rebhun commented afterwards, “It’s like wow. It’s actually a reality. It’s food traveling in an electronic machine. And, I mean, watching our El Pollo Loco delivery bags fall from the sky was a beautiful sight.”

Customers can gain a similar experience during this week’s two-day trial. Once the drone reaches its destination, the basket will open from the bottom and drop the bag to the ground. Rebhun said it was a magical moment to watch El Pollo Loco’s food fall from the sky – a scene from “The Jetsons” comes to life.