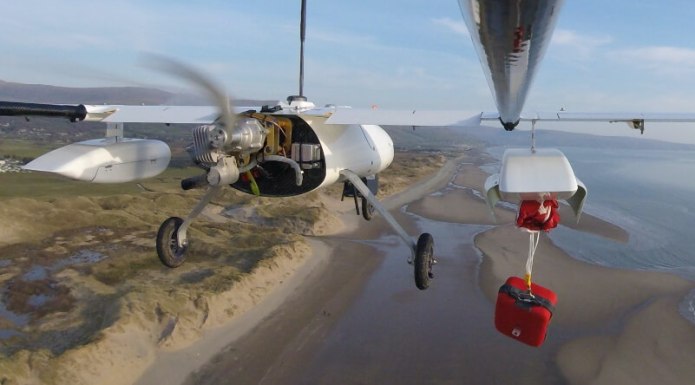 Snowdonia Aerospace (SA) is “another winner” of the UK Future Flight Challenge funding, after receiving a grant for an 18-month drone development programme in partnership with Swiftflight Avionics, reports a press release. This is part of the initial UKP33.5 million element of the Government’s Industrial Strategy Challenge Fund announced on Monday, November 9th.

The organisation’s primary drone project is called Gold Dragon and the money will accelerate the development and testing of its active detect-and-avoid solution for light drones, mostly less than 150kg take-off weight, to enable their safe and full integration into the UK aviation system. SA’s aim is to gain approval for regular and routine Beyond Visual Line-of-Sight (BVLOS) operations and begin delivering  First Response and commercial drone services in Wales and beyond.

Lee Paul, CEO of Snowdonia Aerospace, explained, “The grant will enable us to continue the development of our proposed drone service provision in support of the NHS and other emergency services initially across Wales. Our earlier work demonstrated the advantages of using drones to support remote and rural areas with the craft covering 4.5km in under 3 minutes compared to an equivalent road journey of 20 minutes. This time-saving is critical, for example, in cases where early defibrillation is required.” The release says, “The UK survival rate for an out-of-hospital cardiac arrest (OHCA) is only 8.6 percent. Resuscitation Council guidelines recognise that survival rates of 50 to 70% could be achieved with defibrillation within 3 to 5 minutes of OHCA, but each minute of delay reduces the probability of survival by 10%, and in the UK fewer than 2% of victims have a defibrillator deployed before the ambulance arrives. The situation is most acute in remote and rural locations.”

The organisation has already formed a successful relationship with the Welsh Ambulance Service after a recent trial successfully delivered a defibrillator by drone to a remote rural location. SA aim to prioritise health services in rural communities along with the wider NHS Wales network.

The release goes on, “Flight testing in the unique operational environment provided at Snowdonia Aerospace Centre will also involve other potential emergency response stakeholders such as the Police, Fire, Coastguard, and Mountain Rescue.”

Councillor Gareth Thomas, Cabinet Member for Economy and Community of Gwynedd Council, said, “We are delighted to see that the drone technology trialled earlier in the year from Llanbedr to transport medical defibrillators to remote communities will now be further tested for other responses by the emergency services. We also look forward to linking this work to the STEM Gogledd programme, which supports and promotes STEM education across north-west Wales.”

While Dr. Phil Geoghegan, MD of Swiftflight Avionics, commented,  “This project is an exciting application of the drone active sensor technology, with the aim of routine point-to-point BVLOS UAV flight. We see this as a game-changer for drone operations.”

Paul concluded, “As the UKs leading aerospace R&D test centre, the airfields environment, facilities and infrastructure will also support a range of other companies looking to develop their own Future Flight programmes in a safe operating environment and we look forward to working with them too.”