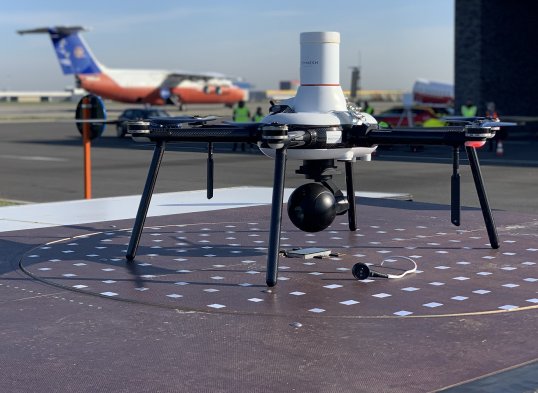 Citymesh has announced this week the successful trials of drones at Brussels Airport for inspection and surveillance, while connected to the airfield’s private 5G network, reports totaltele.com.

Dubbed the ‘safety drone’, the remotely operated device has taken part in numerous tests at the airport, including conducting security inspections of the grounds, closer surveillance of an individual aeroplane during a theoretical emergency, and even monitoring wildlife populations near the runways. The trials also included a detection system which aims to flag any unauthorised “rogue drones” that may be in the area. By being connected to the 5G network, built with Nokia technology, these craft can be flown remotely and travel Beyond Visual Line of Sight (BVLOS). A company spokesperson, explained, “This is the first time a drone flight in the airport area has been done remotely. The network that Citymesh installed with Nokia in 2019 effortlessly bridges large distances at height to and from drones, while high-definition video images and real-time control remain possible.” Adding, “The pilots can perform a flight anywhere and anytime, as long as there’s a connection to the Brussels Airport network.”

Arnaud Feist, Chief Executive at Brussels Airport, said, “It is important for our airport to continue to focus on innovation. Although drones and aviation do not initially seem like a good combination, this is a new reality, the possibilities of which must be explored.”

He continued, “Today, thanks to our private 5G network, we managed to control a drone remotely, which is an innovative first, together with our partners. Drones can be additional tools in our operations, and these tests will give us more insight into the possibilities.”

Brussels Airport is, in fact, not the first to begin trialling drones for various tasks. Schiphol Airport in the Netherlands, for example, announced similar tests last summer and such partnerships between the telecoms and aviation sectors are growing. In January, a consortium involving aviation, aerospace, and telco players was formed to explore the use of drones in industrial and urban environments. One member, Vodafone, is making considerable progress with drone usage in a number of use cases, most recently in November when the company confirmed it was deploying drones connected to their 4G network to deliver medical supplies to remote NHS locations.