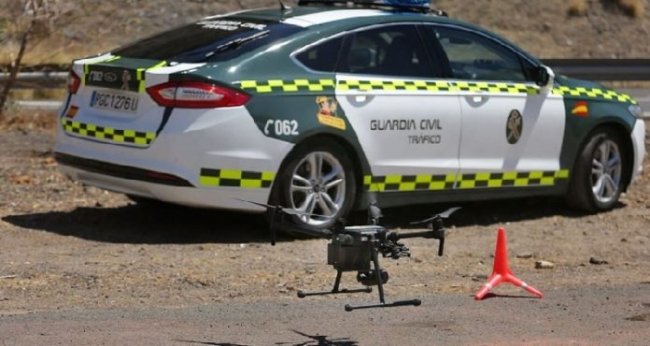 Is anyone surprised that more and more countries are deploying drones as “eyes in the sky” to monitor highways and those that drive on them? At first, it was only in Asia, but Spain becomes the first European country to employ such tactics on a wide-scale.

uk.motor1/com explains that “automatic speed cameras have been in use for quite some time now and are largely responsible for bringing a lot of speeders to justice,” but point out that these cameras “are usually affixed to structures such as lamp posts making them easy to spot, especially for motorists who frequent the same road.” Unfortunately, Spanish drivers are faced with a more ruthless enemy, as the drones can fly around overhead, may never be in exactly the same spot, and can remain inconspicuous to even the most canny human eye.

The Direccion General de Trafico (DGT) is initially deploying over 40 surveillance drones across Spain as part of a trial to see just how effective the craft can be.

The drones currently used by the Guardia Civile are equipped with powerful cameras capable of viewing your number plate from a long distance away as well as easily spotting minor traffic infractions such as speeding, not wearing a seatbelt, or tailgating.

The DGT has trained more than 35 drone and 60 camera operators to carry out this monitoring. Depending on the type of craft, one operator can carry out both functions at the same time.

The most popular drone used by the DGT is the Thyra V109 that comes fitted with an automatic vehicle tracking feature. It operates at an altitude of 120 metres, making it virtually undetectable while on the road, and can fly a top speed of 80 kilometres per hour to keep up with speedsters. It seems likely that other European countries will follow suit sooner rather than later.