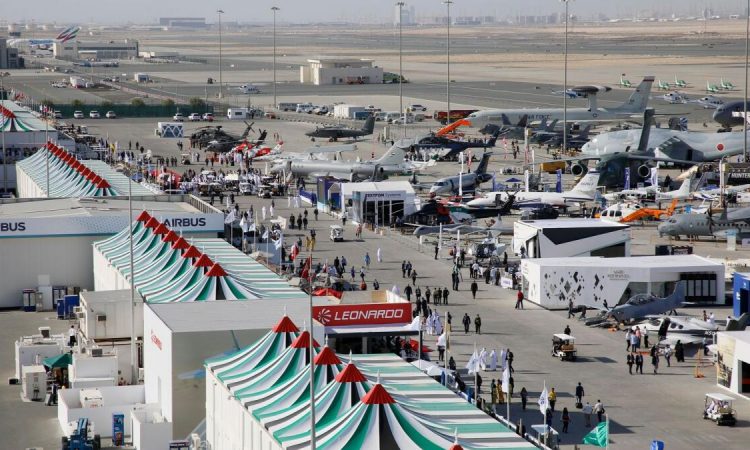 Drones or UAVs (Unmanned Aerial Vehicles) of every shape and size, hailing from around the world, exhibited this week (November 14th-18th) amongst the world’s leading aircraft, at the major 5-day Dubai Airshow located at the Al Maktoum International Airport, reports thenationalnews.com. This was the Airshow’s 17th event.

The post-pandemic extravaganza featured more than 20 country pavilions along with a stunning aircraft display of over 160 commercial, military and private jets, as well as exhibition stands from the nascent, but rapidly growing drone and eVTOL industry.

An example was U.S Logistics company, Matternet, that specialises more in the delivery of medical products. With a wealth of experience in drone transportation including highly sensitive medical samples, the company had its urban model on display. Jon Michaeli, Head of Global Business Development, explains, “During the last five years we’ve been doing BVLOS flights, which means there isn’t someone on the ground who always has eyes on the craft. We’ve been carrying out trial flights in Switzerland over the cities of Lugano and Zurich, and we have operations with UPS in the U.S, and operations coming in Germany.”

The drone manufacturer and operator is also working with the Abu Dhabi Department of Health and logistics company, SkyGo, to create an aerial network to deliver medical supplies around the city.

The aim is to deploy over 40 drones to transport medicines and medical samples weighing up to 2 kilograms to and from hospitals and laboratories, beginning in the first half of next year. Matternet hopes this automated system will soon become commonplace and used by a variety of industries, from e-commerce to food.

Michaeli continues, “We started with healthcare because of the high value of shipments, where delivering them with speed is important. What we solve are problems concerning traffic and congestion. The aircraft fly on their own and follow pre-programmed routes.

“We even have a geofence that is essentially an invisible tube around the aircraft, and if for some reason the aircraft leaves that tube, it knows, and it can deploy a parachute and float to the ground.”

While aerial delivery is presently costly and the regulatory hurdles high, he believes with economies of scale, drones are a viable option. He adds, “The more you fly the cheaper it gets. The unit economics are very comparable to courier delivery, or even cheaper, as you scale.” UAE-based GDAS was attending the Dubai Airshow for the first time under the start-up category. Shawky believes construction companies and the oil and gas sector are potential areas for steep growth.

He explains, “The oil and gas sector has so many requirements for drones, from pipeline inspection to asset inspection and management. For example, traditionally the flare stack inspection takes a month of shut-down, and you have to lay it down and do it manually, but using the drones we can save the asset from being shut down, save the company millions of dollars and do the inspection while the production is online and ongoing.”

According to U.S research and consulting firm, Verified Market Research, the global drone logistics and transport market, valued last year at USD 8.7 billion, is projected to reach USD38.7 billion by 2028, growing at an annual rate of 20.6 percent.

Shawky believes drone innovation will be a prolific job generator over the next decade. He points out, “Drone development will open a lot of career opportunities, in drone manufacturing, in autonomous software development, training pilots and aeronautical engineers. Here, at the Dubai Airshow, we are seeing new customers from all over the world and creating new partnerships, leads and potential investment.”

Another major area for UAVs lies in assisting First Responders. The UAE’s Civil Defence Service is holding trials presently of larger unmanned helicopters made by Aura UAVs to fight fires. The company has field-tested its Aura 100 helicopters to douse flames high up in skyscrapers as well as in the centre of industrial accidents where it is too dangerous to risk manned helicopters. Ksenia Neuwirth, the MD of Aura UAV, said its craft could be used in a variety of sectors, as they can carry a payload of up to 100kg and hover at a height of 3,000 metres. She comments, “We are testing the firefighting application as we can see big demand in urban areas, in particular among the high-rise buildings.”

Neuwirth continues, “We are the niche solution as we fly above the height of the ladders. Above 100 to 120 metres it becomes dangerous for the firefighters, so the next elevation is us. We go higher.” The craft are also adapted for agriculture, where they can be used to plant crops or disperse fertiliser or pesticides, as well as other niche sectors.

Neuwirth adds, “We are interested in developing search and rescue missions for people who get injured or lost in the mountains or people who need to be rescued from the sea as we can drop inflatable boats and first aid.

She concludes, “Natural disasters and general emergency situations is another area, because we can carry up to 100kg of payload, and being unmanned, you do not risk a pilot’s life.”