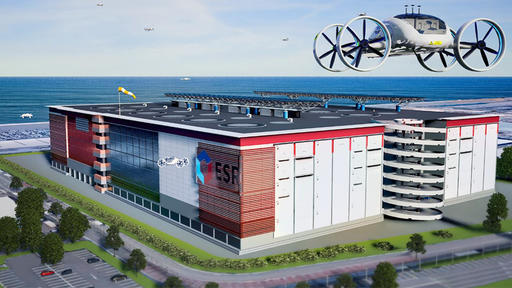 The ESR Higashi Ogishima DC-Phase 1, located near Tokyo, will base a fleet of more than 24 drones that aims to deliver cargo to distribution regions across the area. The USD1 billion facility will be nine stories high and cover 365,000 sq. metres, making it one of the largest distribution centres in Japan.Completion is set for March 2023, when it will be capable of delivering about 14 tonnes of cargo on a daily basis.

Stuart Gibson, ESR’s co-founder and CEO explained,  “There’s a lot of functionality that you’ll get with these drones that you don’t currently have, but a lot of things have to happen, first, to get there.”

The move, part of a sector embrace of aerial delivery, will make ESR one of the first companies capable of delivering several heavier payloads over a single trip using the same drone. This flagship project, a partnership between ESR’s Future Solutions Group and UK-based eVTOL company VRCO, will begin as a trial before the business model is rolled out across the rest of Asia.

These trials are to determine include the optimal design of the operation itself, for example, how the drones may interact with cargo and charge their batteries, how to set and coordinate flight paths from a centralised command system, how to factor in weather patterns as well as non-technical challenges such as coordinating with local regulators, and putting in place appropriate emergency and safety procedures.

Daniel Hayes, VRCO’s co-founder, “The objective of this early phase is to discover what the variety of different capacity limits could be, what flights and routes we can service, and what the optimum operational model might look like.” Michael Smith, another of VRCO’s co-founders, added, “The customer of the future is going to have higher expectations. They may want something in a same-day or two-hour delivery slot.” He continued, “This is the broader opportunity for aerial cargo, because it is capable of handling these tighter schedules compared to today’s capacity.”

A number of companies have already experimented with single-drop aerial deliveries for things such as fast food and shoes, but few have put in place both the hard and soft infrastructure that can enable a fleet of drones to simultaneously deliver several heavy payloads along a single route. Smith commented, “That is what this programme is all about – defining the concepts of operation for how a high-capacity aerial cargo service would be brought into real life.”

Some factors such as regulatory buy-in and the maturity of a country’s 5G infrastructure are out of the company’s hands. Gibson explained, “5G has to be there, so you really have that real-time, centralised control necessary to operate the fleet.”

ESR chose Japan because its 5G network is set to be completed in the next few years. Gibson pointed out,  “The Japanese government seems to have made the most progress in creating a regulatory framework to allow these drones to operate.”

VRCO’s Smith, added, “As battery energy density increases, drone ranges will increase. So the service actually becomes better – longer range, more endurance, higher payload. So there are lots of reasons to be optimistic about this business model, going forward.” Concluding, “It is truly groundbreaking what ESR is doing.”