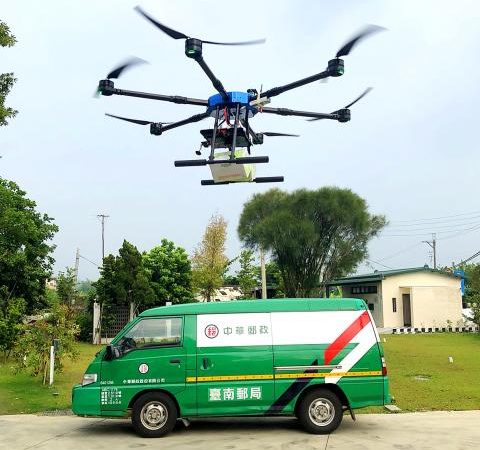 The move is part of the MOT’s “drive to increase the commercial use of drones,” the Ministry explained. Adding that the postal company has previously tested UAVs for mail delivery in Tainan’s Zuojhen District and on Alishan.

In Tainan, the drones carried “5kg shipments of peaches from farms in the district to the Zuojhen Post Office, cutting what is typically a 90-minute truck route to 15 minutes,” the Ministry stated. On Alishan, “UAVs delivered medical supplies to isolated communities.” While both trials were aimed at testing the feasibility of using unmanned craft for deliveries, the commercial viability of such a method is extremely important. A Ministry spokesperson explained, “Cost is a major issue. When we used drones to deliver fruit in Tainan, we discovered that the associated costs were higher than the value of the fruit.” The Institute is accepting bids for its March trial from drone operators who conform to the cost and service requirements of Chunghwa Post. Trial runs will then occur after such bids are accepted.

It takes around 45 minutes by sea to reach the Siaoliouciou post office from Pingtung County’s Donggang Township about 16km away. Presently, the company ships 500kg to 800kg daily between the post offices, but on occasions is unable to make deliveries in winter when seas are rough.

UAVs could help overcome these challenges by flying over the water, but they also have limitations, given drones presently cannot carry heavy loads (a weight limit of 20kg per delivery), as well as an inability to fly in strong winds or treacherous weather.