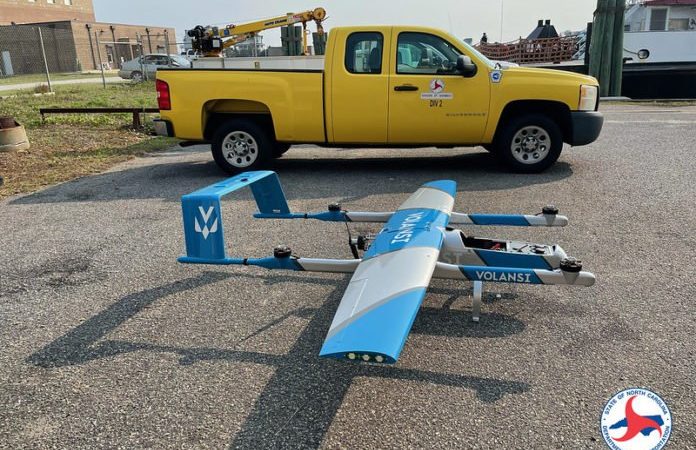 Secretary of Transportation Eric Boyette, commented,“This is a tremendous first step in better connecting Ocracoke Island to potentially life-saving supplies and equipment. Today, the island is accessible only by plane or by boat. What we’re working on here is an entirely new, third method of serving the needs of Ocracoke’s people.” During last Thursday’s test flights, a drone took off from the Hatteras Village ferry dock and landed at the South Dock on the north end of Ocracoke Island. The release explains, “The eight-mile round trip flights averaged only 18 minutes in flight time. To simulate a real post-storm emergency delivery operation, both flights carried small payloads. The first delivered a small survival kit, space blankets and a chocolate muffin to Ocracoke, while the second delivered bottles of water.”

NCDOT Unmanned Aerial Systems Program Manager, Ben Spain, said,  “This was just a small trial, but we hope to continue scaling this up to larger payloads and longer flights. Long-term, we could see deliveries coming to Ocracoke all the way from the mainland.”

The flights were conducted under NCDOT supervision by a team from Volansi, who provided the aircraft. The Volansi C-10 Gemini is capable of vertical takeoff and landing (VTOL) and fixed-wing horizontal flight, and can carry a payload up to five pounds. NCDOT’s Ferry Division was an integral part of the operation and witnessed the benefits drones are capable of providing people like those living on a barrier island. This same aircraft could be outfitted with a camera to monitor shoaling in the ferry channels, and could reduce the strain on the ferries as a way to get important items quickly to the island.

The operation was possible by a waiver for beyond visual line of sight (BVLOS) flight granted under the Federal Aviation Administration’s BEYOND program, which enables select state and local agencies to conduct drone operations that test the future capabilities of the technology. The next test will involve flying a drone from Hatteras all the way to the Village of Ocracoke. The timing of that trial has not yet been determined.