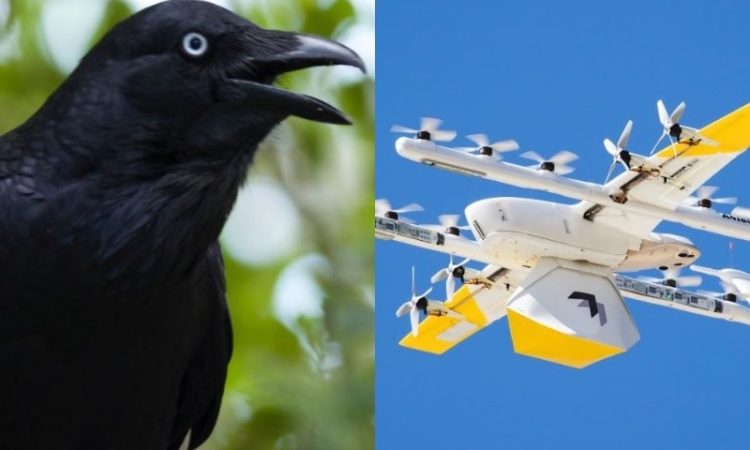 Like a scene out of Alfred Hitchcock’s film, “The Birds”, Wing delivery drones in Canberra, Australia have been suspended after repeated and multiple attacks by birds, reports abc.net.au. The primary feathered creature responsible are ravens who attempt to bring down the craft by attacking them (see video below).

The company believe it is “only a matter of time” before a drone is downed and why services are suspended until this serious difficulty is resolved. Wing has paused its operations in the northern suburb of Harrison, while bird experts work out what is going on with the local ravens.

Wing explained to its customers, “We’ve identified some birds in the area demonstrating territorial behaviours and swooping at moving objects. While this is common during nesting season, we are committed to being strong stewards of the environment and would like to have ornithological experts investigate this further to ensure we continue to have minimal impact on birdlife in our service locations”. Due to what some have described as “extreme lockdown measures” during the Covid-19 pandemic, Australian residents have been relying on drone delivery services more than ever before.

Harrison resident, Ben Roberts, has been using these transportations during the lockdowns and filmed a raven attacking his drone delivery coffee order. Roberts explained to ABC News Australia, “It’s just good to be able to grab a quick brew without having to get in the car, drive to a cafe, mask up, interact with other people and unnecessarily expose yourself to Delta when I can just order it to my front yard”.

He continued, “We don’t want them getting injured, they’re an important part of our environment here. I think I saw them swooping a garbage truck the other day, although I haven’t seen them attack any people which is good, but they are proving to be very territorial at the moment”.