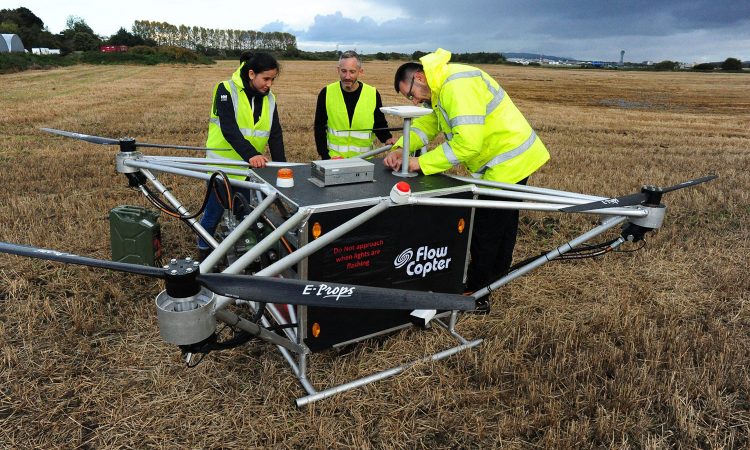 A classic case of “a drone with a difference”. Scottish-based company, Edinburgh Flowcopter, which specialises in Industrial Heavy-Lift Drones, has come-up with a unique concept – an unmanned craft that “runs aviation-certified combustion engines which will drive digital-displacement pumps designed for harsh environments, providing control bandwidth to fly,” reports inceptivemind.com.

The company’s initial aim is to assist helicopter operators, in particular, to optimise freight, surveying and search & rescue. The ability to fly in harsh weather over rough and inhospitable terrain is one of its primary selling points as well as long distances compared to its more vulnerable and less distance-flown electric counterparts. This robustness has Scotland written all over it, although such a craft could be helpful in the many remote and harsh environments around the world.

Now the science bit. The article states, “It is possible to distribute and regulate the hydraulic flow between a number of different outputs, instantly responding to digital control commands, which is very important for balancing a flying UAV. Hydraulic motors are totally sealed and made for extreme offshore environments. Each of them will deliver up to 96 kW of power with a weight of 5.5 kg and a price of less than USD1,000.”

It goes on, “The company says the weight of the hydraulic motors, the digital displacement pump, the gas engine and its fuel tanks might be significant, but when compared to the weight of lithium batteries and the limited range of electric drones, its hydraulic drone is a promising design.” Flowcopter is capable of flying for more than 6 hours and up to 560 miles. After a few minutes of refuelling, it can then continue its flight. Shorter flights could facilitate payloads up to 150 kg, making the drone a very capable short-range unmanned craft.

Flowcopter has developed a raw-looking prototype based on a welded metal frame and has been performing some tethered flight testing. In the video shown below, the prototype surprisingly takes off the ground regardless of its present rough and ready look.