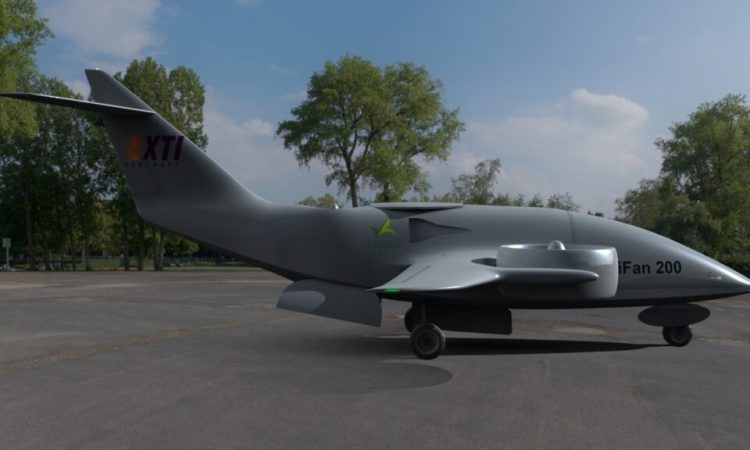 U.S. Florida-based XTI Aircraft has been developing its TriFan programme for over five years, and now the company has decided to expand the project from just being a passenger carrier to also a long-range, autonomous diesel-hybrid powered cargo drone, reports newatlas.com.

The TriFan 600 has been developed as a six-seat hybrid platform using a turbine engine as its main propulsion system. The new TriFan 200 is being designed to carry two people or cargo and uses a diesel engine for power generation.

According to newatlas.com, partnering with Verdego Aero, XTI says it is able to put in a 180 kW generator running on Jet-A to feed the TriFan’s high-power battery pack, giving it the ability to carry a 227 kg payload over a distance of 370 km. While no maximum cruise speed is listed for the cargo craft, XTI explains the TriFan 600 six-seater is rated for 555 km/h, or close to twice the speed of a conventional helicopter.

An advantage of this design is its flexibility to not only take off and land on a runway, but to switch to VTOL and descend in a field, on a yacht or helipad wherever the flight occurs.

There are some disadvantages. For example, while the hybrid is cleaner and more efficient than a turbine powertrain by some 35 percent, it is still not a zero-emissions electric. Also, it runs only via three fans, which not only reduces its control during a hover manoeuvre, there is no means to fall back on to, if you lose a motor.

This may make the TriFan 600 difficult to certify as a commercial passenger aircraft, so perhaps, using the platform as an unmanned cargo drone could provide a more realistic way for this design to get airborne and used.