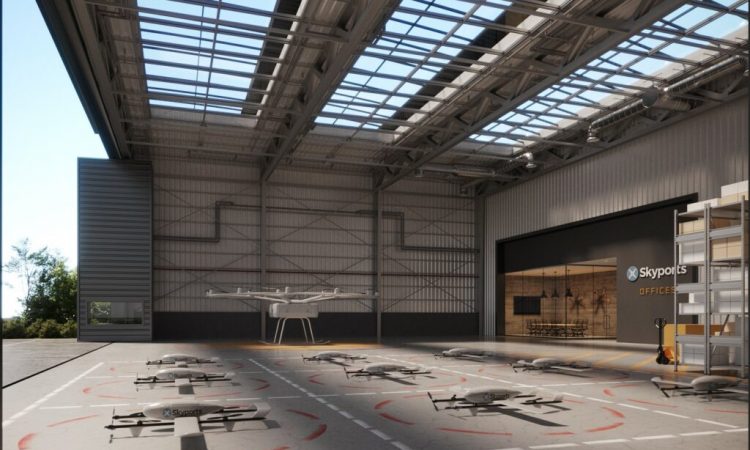 The ambitious plan for a drone hub to service Scotland’s islands with electric-powered unmanned flights “has taken a major step forward” with the investment of new UK Government funds, reports obantimes.co.uk.

The hub at Oban Airport is to be a high-tech base for electrically-powered drones, transporting medicines, biological samples and cargo between the Hebrides and the mainland. A “world-leading training facility” is to be built nearby. The government is investing UKP170,000 from the Community Renewal Fund to develop the business plan.

The cash, which is part of the UK Government’s UKP1.7 billion investment in levelling up projects in Scotland, will bring jobs and investment to the area. It has been revealed that the Argyll and Bute council is working in partnership with Skyports, “a leading drone-landing infrastructure design and delivery company”. The hub will build on a Skyports initiative that used drones to fly thousands of medical materials, weighing up to 6kg each, between NHS facilities on the islands over a three-month period last year, saving over 12,000 hours waiting time.

Royal Mail is also interested in unmanned craft as part of its service delivery and has undertaken trials with Skyports from Oban out to the island of Mull.  Another application being explored is the use of drones to inspect and maintain offshore wind farms. UK Government Minister for Scotland, Iain Stewart, commented, “The potential of this innovative project is hugely exciting. Drones are playing an increasingly important role in everyday life, no more so than in Argyll and Bute where pioneering drone usage is taking place.”

Alex Brown, Director of Drone Services at Skyports, said, ‘In 2021 we transported Covid-19 tests, pathology samples and medicine up to 50 miles between NHS medical facilities in the Argyll & Bute region of Scotland. Alongside the flight trials, we have been working with Oban Airport to undertake technical due diligence on how a drone innovation hub could be incorporated into the airport.” He added, “We aim to make Argyll & Bute the leading region in the UK for Advanced Air Mobility.”

The “exciting plans” also include working with the Oban-based Scottish Association for Marine Science (SAMS), one of Europe’s leading marine science research organisations with skills in UAV technology. The hub will work in tandem with SAMS and Skyports’ proposal for Europe’s first all-weather drone-training academy.

The national indoor trial facility for UAV will have the capability for aircraft, pilot and flight crew testing and training. Apart from protecting people and craft from the elements, the roof is to be “radio-transparent”. This enables drones being flown indoors to “see” the GPS, satellite communications and beacons required to operate properly.

Dr Phil Anderson of SAMS who has pioneered the use of small unmanned craft to monitor the polar ice cap, remarked, “This building will be a one-off. We don’t think that a facility such as this exists anywhere else in the world.” Oban airport is an ideal location because it has the potential for a 3.5 hectare business park to be developed. Having council owned land available for purchase or rent will allow the park to grow into a drone incubator for all related companies.

Argyll and Bute Council has the most inhabited islands of any Scottish Local Authority (23), making it an ideal site for a west coast logistics UAV hub.