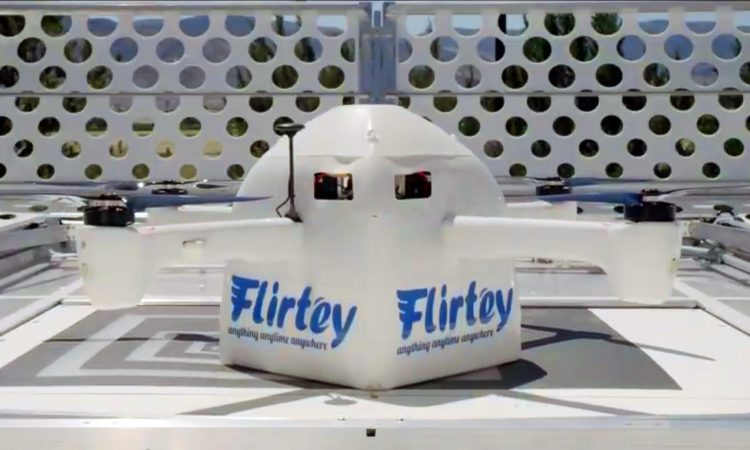 It seems an age that Reno-based Flirtey first trialled its drone technology by delivering Slurpees and Domino’s pizza by air, but this week the start-up has officially opened pre-orders for its drone delivery system after over 6,000 trial flights, reports eu.rgj.co.

The company’s drone technology has already received regulatory certification in New Zealand and now focuses on completing the FAA’s certification process in the U.S. Flirtey has added additional failsafe systems to its Eagle delivery drone, including a parachute that can be deployed if an emergency arises.

This expansion is in response to growing demand for its services, according to Sweeny. Flirtey aims to sell and license its technology to companies that want to run their own drone delivery system. The company envisions a wide range of applications for its technology, including retail, grocery, medical supply and on-demand food deliveries.

Sweeny continues, “Our technology enables businesses to create their own logistics and operate their own store-to-door delivery system. What we’re providing are turnkey solutions that any business can use.”

Unfortunately, Flirtey faces a market that looks quite different from the time that it first demonstrated Slurpee and pizza deliveries back in 2013. Even Sweeny says, “We are the metaphorical David in a field that has seen a lot more Goliaths entering over the years.” Retail giants such as Amazon and Walmart, for example, are investing heavily in their own drone delivery operations.

The reason for the interest from major retailers on drone deliveries is best summed up in one word: cost. Simply, autonomous drones offer lower cost per mile and higher speed than vans in last-mile deliveries. Operational costs, for example, are over 70 percent lower than a van delivery service.

Drones are also more environmentally friendly, at a time when the phrase “reducing one’s carbon footprint” is a major influence for many world companies.

Flexibility is a major strength for the Flirtey business model. In addition to providing software and equipment such as its Eagle drone, the company will also help companies set up their own take-off and landing platforms and scale their operations as needed. The biggest difference is the amount of control that clients will have over their own operations.”

Sweeny explains, “Instead of larger companies that want to control the operation, we’re empowering any business that wants to be a drone delivery operator to do so.” To date, Flirtey has support from several investors. The company raised USD15 million in its latest funding round which includes Hancock Prospecting, Y Combinator and In-Q-Tel. In-Q-Tel was especially intrigued by the national security applications of Flirtey’s technology.

In-Q-Tel Principal Andy Ku, in a statement, says. “We’re excited to be an investor in Flirtey. We scout the global market for cutting-edge technologies that have the potential for both commercial success and high national security impact and Flirtey ticks all the boxes.”