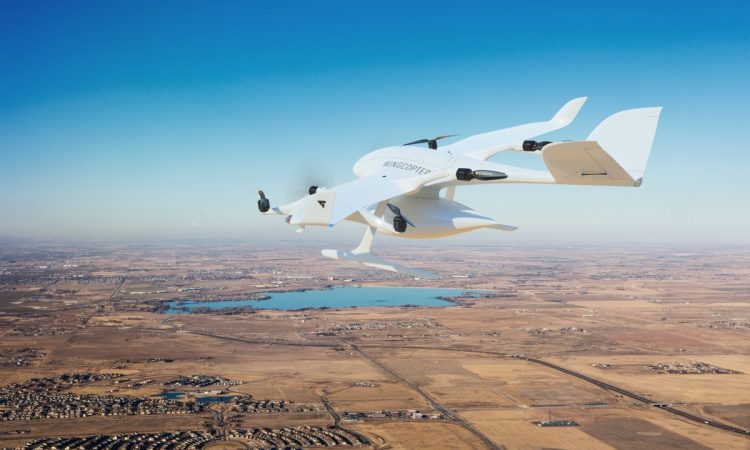 Back in April, German drone-manufacturer, Wingcopter, launched its eVTOL fixed-wing delivery drone, the Wingcopter 198, and this week announced a strategic partnership with Air Methods to create a healthcare-specific drone delivery network across the U.S.

Air Methods was founded in 1980 and today has a fleet of 450 helicopters and fixed-wing aircraft at more than 300 bases across 48 states in the US, that carry out close to 100,000 deliveries of medical supplies and equipment per year to hospitals and people, mostly in rural and more remote areas.

Wingcopter’s 25.5 x 77.9 x 59.8 inch eight-rotor drone rises up vertically like a helicopter, but then transitions to a fixed-wing horizontal flight once in the air.

The craft can haul around 13 lb of cargo, and accommodate up to three packages (to a total of 5 kg/11 lb in weight) at the same time, each lowered by its own winch from a hovered flight. Range per charge is 46.6 miles when hauling 5 kg, and maximum cruise speed is 89.5 mph.

The new delivery partnership is called Spright, and is being tested in Kansas from the Autumn with project partners Hutchinson Regional Medical Systems. If proven successful, a nationwide network of rapid delivery of medical supplies by drone will be rolled out using Air Methods existing bases. Wingcopter’s CEO and co-founder, Tom Plümmer, remarked, “We are thrilled to team up with Air Methods. Our technology has been used globally to effectively deliver medical supplies, for example insulin in Ireland, children’s vaccines in Vanuatu, emergency medication in Malawi, and just recently, blood samples in Germany.”

He continued, “Our vision to ‘save and improve lives’ resonates perfectly with Air Methods’ legacy of providing lifesaving care, combined with Spright’s ambition to improve the quality of healthcare across the US by deploying fleets of Wingcopters, and we are excited about scaling this together.”