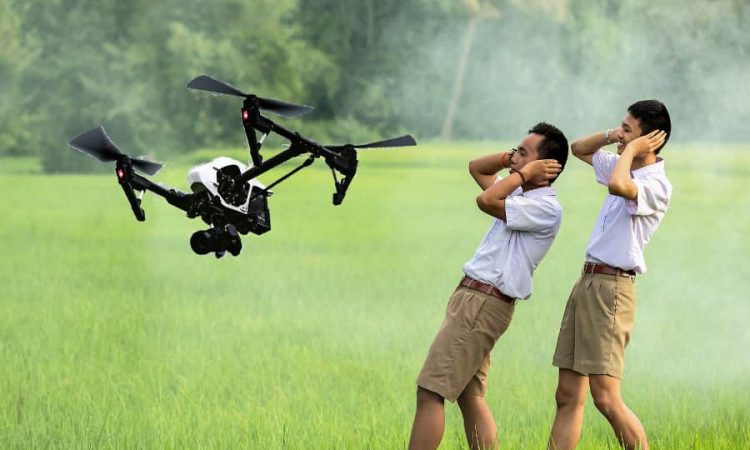 Time and time again when the public is asked their view on delivery drones, three concerns are always cited. Privacy, collisions and… noise pollution (“too noisy – like a swam of bees!”)

So, it is heart-warming news that the U.S. Mississippi State University and its Raspet Flight Research laboratory, has been focusing on this issue since 2016, reports commercialuavnews.com.

The noise issue particularly interests UAMN and on how to reduce this irritating “whining pollution”. In a recent and well-received article, the website looked at the silent Ion Propulsion system as one potential answer. Today, Raspet Flight has constructed the University’s quietest laboratory, referred to as an “acoustic anechoic chamber” which absorbs the reflection of sound waves. Built as part of a collaborative research venture seeking to quiet unmanned aircraft systems, the lab is covered by many eight inch deep polyurethane foam wedges in every part of the 10x18x10 room’s interior, including the floor.

By absorbing sound waves emanating from within, researchers can accurately measure the precise frequency on which they are focused. In this case, the Raspet team measure noise produced by propellors with four or five blades rather than the standard two, rotating a fewer revolutions per minute to reduce noise. The objective is to see which propellors create the same, or acceptably equivalent, thrust at a potentially lower RPM.

As an academic research centre specialising in the advancement of unmanned aircraft systems, the laboratory has strong connections with the FAA and the U.S. Department of Defence. Their research is sponsored by the military which in the future could “enable the U.S. Army UAS to one day fly cooler, quieter and with more efficiency than ever.” This makes complete sense, for why do you want to let your enemy know, when stealth drones, especially the micro ones, could be the future.

While the research is more focused on military applications, advancements in this field can also allow commercial UAS, for example, to survey crops, inspect buildings, map site zones, perform drone deliveries or transport people more quietly, resulting in fewer disturbances for those on the ground.

In 2017, a NASA study on drone noise showed that “its whining” is more annoying than the sound of passing cars, even when taking into account the public are far more used to the sound. And just like the advent of the quieter electric cars, the Raspet team will no doubt, find a more peaceful solution for drone propellers.