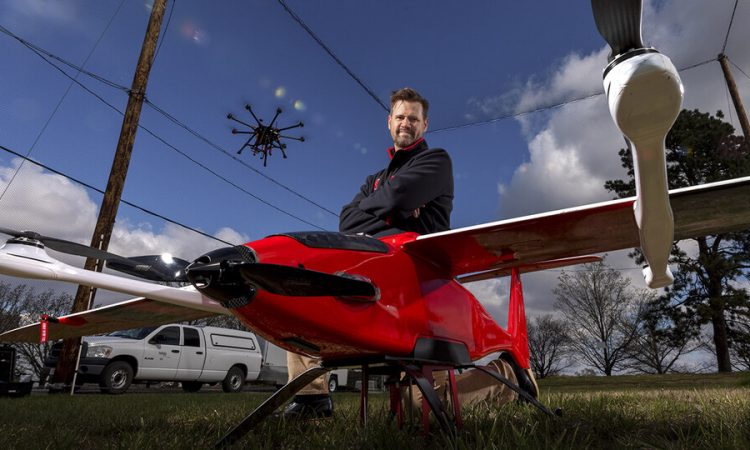 It isn’t everyday that someone is handed a USD500,000 grant and told to develop drones over a five-year period, but that is what happened to Justin Bradley, an Assistant Professor of Computer Science and Engineering at Nebraska University, reports unl.edu.

His goal is “to give drones and other robots the ability to sense and adapt to a changing environment, diverting energy to the most important tasks at hand while pausing lower-priority work.”

Bradley explains,“The best way to think about it is that when you are doing tasks, you can rapidly refocus your attention as you need to. If something happens in your environment, you can look, assess and shift your attention as needed to adapt to the situation.”

He continues, “Robots don’t have that capability. This work would allow them to allocate that attention and other resources according to what they need to do.” In the context of drones and robotics, “attention” is an approximate equivalent of computational power. To enable them to sense its environment and direct power to a priority task, Bradley “must develop mathematical and computing foundations, analytical tools and algorithms that guide resource allocation processes and optimise overall performance.” His findings will then be incorporated into his final product: a resource-aware autopilot system that incorporates path-planning algorithms, along with new controllers for the drone.

The autopilot product is to be compatible with the widely used, open-source Robot Operating System and will operate on common, small robotics hardware. Bradley is working to obtain a provisional patent for the technology.

Bradley comments, “From an impact standpoint, this will be really useful for complex and changing operations. It will allow drones to do longer and more efficient surveillance and reconnaissance missions where the environment is changing.”

Bradley’s autopilot system will also unlock the potential of “anytime algorithms,” which were originally devised in the 1980s to offer a trade-off between computation time and the quality of the algorithm’s solution.

Despite their utility in balancing computation time with precision, anytime algorithms haven’t been widely adopted because there hasn’t been a ubiquitous framework through which to deploy them. His work may change that.

Bradley adds, “This is the first time they’ve been given a chance to take off, even though they’ve been on the theoretical shelf for 30 years.”

The Assistant Professor will test his autopilot system at a rainforest in Costa Rica where drones are engaged in a sequence of tasks ranging from computationally simple to complex, making it the perfect testing grounds. For part of the mission, the drones fly waypoints, which means they are simply flying a route between different physical locations. But the other part of the mission, collecting samples from leaves, is more demanding.

He says, “When the drone reaches a collection point, a lot of stuff has to happen. It builds a plan to navigate a very cluttered environment, drops its collector mechanism and grabs a leaf, all in the presence of wind and downwash from propellers. And as it does this, its characteristics change, including a change in its center of mass.” Adding, “It needs to adjust to these things and allow itself to refocus.” Giving drones the ability to reallocate resources will be crucial to maximising the full potential of AI and machine learning, two rapidly growing branches of computer science that enable machines to perform tasks that typically require human intelligence.

Presently, the type of technology Bradley is developing doesn’t exist, in part because of a dearth of expertise in this highly specialist field. As part of the grant, he aims to develop a new program of study that would enable Nebraska students to gain a bachelor’s degree in robotics combined with a master’s degree in cyber-physical systems, known as CPS.

Bradley is also focused on engaging middle school girls in rural Nebraska in CPS and robotics concepts as well as collaborating with the Central Community College to hold a weeklong camp focused on robotics. Adults are very welcome to attend too as part of the Osher Lifelong Learning Institute.