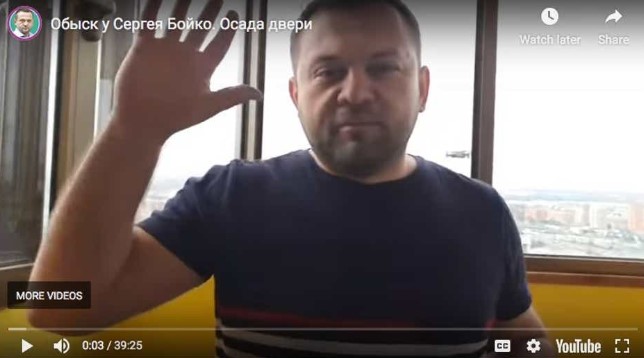 “In simultaneous morning raids in 43 cities on Thursday, Russian security services descended on the homes and offices of supporters of Navalny, whose “Smart Voting” movement is credited with drastically reducing the number of pro-Kremlin members of the Moscow city council in local elections on Sunday.

“More than 200 raids were carried out, from Vladivostok on the Pacific to Krasnodar in Russia’s south, according to Navalny’s close allies.” reports the paper.

USA Today says that Sergei Boyko, who came in second with nearly 20% of the vote in the mayoral election in Russia’s third-largest city of Novosibirsk last Sunday, was raided.

“Boyko on Friday posted video of the raid on YouTube showing him launching a drone purportedly carrying a hard drive with sensitive data about the political movement. The video then shows security police banging on the door and entering his office and apartment,” reports the newspaper.

“All the important digital information is on there,” Boyko said in the video.

“The evacuation is complete: The drone arrived at its destination, the person caught it … and no one will get their hands on (the digital contents),” he said later in the video.

In the post, Boyko said the goal of the police was “to intimidate and rob.”

“He added that security forces took laptops, smart phones and flash cards. But he vowed to keep up his opposition work,” USA Today writes.

“This is our city,” he said. “We are not going to stop our work, don’t you worry about that.” He added that authorities on Tuesday also blocked bank accounts linked to Navalny’s political aspirations.

“Boyko later told local media that police searched his apartment a second time Friday, according to Moscow Times, an independent, English-language news site. “They must have gotten upset by the drone video,” he said, according to the paper.