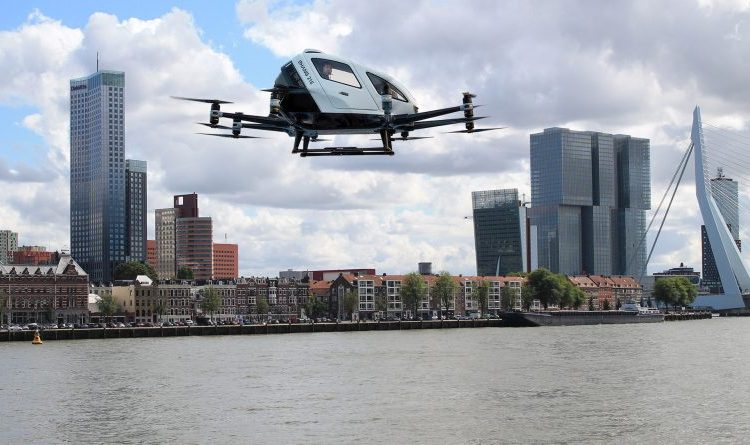 (Translated from Dutch to English)

The Netherlands Aerospace Centre (NLR) announced this week, it is coordinating the first air taxi flights for the European project AMU-LED, reports dronewatch.nl.

To facilitate this mutual coordination, much work is being done in Europe on U-space, a term referring to a collection of technologies, protocols and agreements that ensure drones and traditional aircraft can use the same airspace in a safe way. The Air Mobility Urban – Large Experimental Demonstrations (AMU-LED) – project has been set up for this purpose by the European Commission. As one of the seventeen European consortium members, NLR plays an important role in the AMU-LED project. Not only is the group involved in harmonising the technology discussions, it also plays a leading role in the preparation of various demonstration flights, to take place during 2022 in Santiago de Compostela in Spain, Cranfield in the UK and Amsterdam, Rotterdam and Enschede in the Netherlands. This two year project includes 100 hours of flight time over the urban environment. The tests are coordinated by Marta Tojal Castro, R&D Consultant at NLR.

According to Castro, AMU-LED is best viewed as a prelude to the introduction of U-space (the future airspace for drones and other aircraft). She says, “We intend to field-test various technologies and scenarios that may become part of U-space. Think of remote ID technology, which helps us determine who a particular drone belongs to and where it is flying or to deconfliction technology that should prevent a drone from colliding with another aircraft. And can 5G indeed be used for communication with the drones?”

Behind U-space, drones will fly under automated guidance, where a flight plan is submitted for each flight. In the future, all drone operators in Europe will be affected by this.

Castro continues, “With AMU-LED, we focus on the medium term first. First, we want to divide the airspace into different layers. The lower 120 metres are for the small drones that may take photographs or carry out inspections. This is called the standard performance layer. Then above this is a separate high-performance layer for delivery drones and air taxis. This is a controlled airspace that needs to be coordinate with general aviation.”

The core of AMU-LED revolves around a number of ambitious flight demonstrations. For example, in the Netherlands a number will be operated in the second half of 2022 with an EHang two-passenger air taxi. One of the trials will be a flight with the EH216 from the port of Rotterdam to the Hague Airport. The craft is controlled remotely, there is no pilot on board. Part of this also involves flying in controlled airspace. The intention is that communication with air traffic control will take place via the GoDrone app.

In the context of AMU-LED, it has been decided to keep the risk level limited. For example, no one will be on board during the trials with the air taxi. During the flights near Rotterdam airport, a traditional RT operator is standing by as a backup. And for the tests with the smaller drones in the controlled airspace of Schiphol, another transponder will be added, so that air traffic control can follow the aircraft in the ‘old-fashioned’ way. The European aviation safety organization EASA is also watching critically. Castro points out, “They can’t afford a crash with a manned drone at this stage, to prevent public opinion from turning prematurely.”

Test flights with delivery drones over urban areas are also part of the program. For example, a craft may deliver a package to the Olympic Stadium in Amsterdam South or one with an urgent medical load on board takes off from the roof of the NLR office in Amsterdam South and then flies to the Marineterrein in the centre of the city: a BVLOS flight of a few kilometres in the controlled airspace of Schiphol. Public opinion is another common thread in the AMU-LED project. For example, research will be conducted into the reactions of people to the test flights with the passenger drone. Castro comments, “Previous research by EASA has shown that many Europeans are quite sympathetic to Urban Air Mobility. And during a recent test in Amsterdam with a food delivery drone, it turned out that people on the ground hardly noticed that it was flying over.”

NLR also conducts research into public acceptance of, for example, air taxis in other ways. For example, the Virtual Community Noise Simulator (VCNS) was developed, which allows people to experience what it is like when an air taxi flies over by means of VR glasses and headphones.

Although, a lot still needs to be done to make AMU-LED a success, a follow-up is already being considered, in the form of a project that starts in 2023. Castro says, “If it has been proven in practice that the various U-space technologies and concepts work well, the next step is to make U-space suitable for the end user. It is true that some operators in and outside Europe have already come a long way with some applications, but eventually you will need U-space to continue.” Despite the complexity and the many consultations that the project entails, Castro is optimistic. She concludes, “I believe drones can play a useful role in our society in all kinds of areas. Drones can perform many tasks more efficiently. And maybe in the future we will get into an air taxi just as easily as we are now in a car. Although I think that there will still be a high price tag for the time being.”