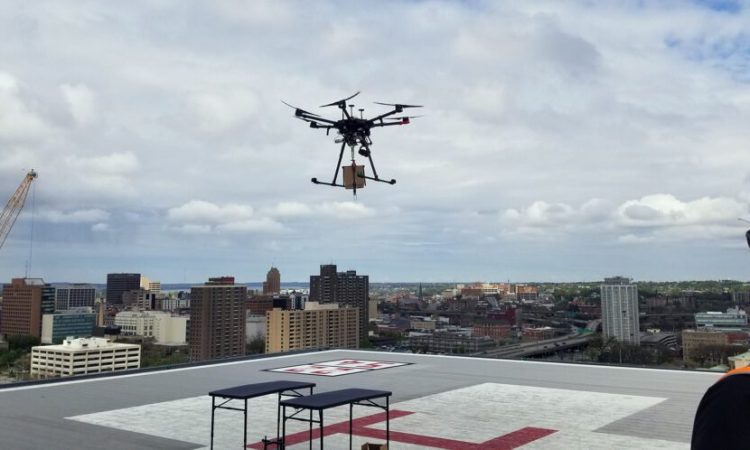 Present regulations require drone operators to always have “a pair of eyes” on the drone, limiting the ability to fly long distances.  The release explains, “BVLOS is the key to unlocking the full potential and economic advantage of routine commercial drone operations like medical and package deliveries.” In 2019, NUAIR and the Test Site received their first BVLOS authority for an eight-by-four mile stretch of airspace from the New York UAS Test Site, at Griffis International airport  south to the State Preparedness Training Centre in Oriskany. This new airspace authority extends west of Griffiss towards Oneida Lake increasing their overall BVLOS airspace to 35 miles.

Anthony Picente Jr, the Oneida County Executive, commented, “Oneida County’s Test Site at Griffiss International Airport has long established itself as an elite hub for all things UAS. The one-of-a-kind testing, research and development that occurs here is elevating the entire industry.”

He continued, “This latest FAA authorisation will allow our 50-mile drone corridor to push the limits of what is possible yet again, and we look forward to the new advancements that will result.” Tony Basile, NUAIR Chief of Operations, added, “This new  authorisation allows us to test more advanced, long-range flights and help us prove BVLOS operations can be done safely.”

NUAIR will utilise the ground-based surveillance systems (GBSS) installed throughout the corridor to monitor air traffic and detect intruder aircraft for BVLOS operations that are taking place at or below 400 ft. Visual observers may also be deployed during such trials to assure safety of operations. Hope Knight, Empire State Development acting commissioner and President and CEO, said, “Supporting innovative technology that is creating the jobs of tomorrow is at the heart of what ESD and the New York State Regional Economic Development Councils are designed to do. By continuing to support the growing UAS industry in Central New York and the Mohawk Valley, we are ensuring its continued development in New York State, securing our place as a global leader in this emerging business.”