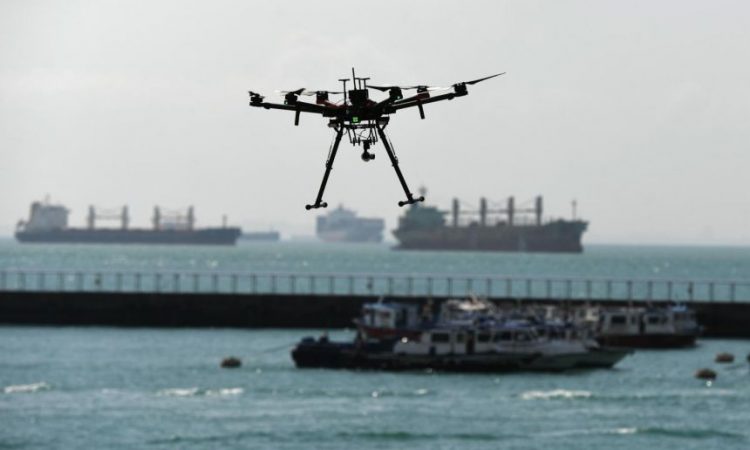 The building blocks for a specialist “air traffic control tower” for drones flying over Singapore are in place after trials for the system were recently completed, reports straitstimes.com.

The country’s government stated last week this “would help efforts to find ways to better manage drone traffic safely on a large scale” after a consortium led by Nova Group, an Australian-based technical consultancy firm, had successfully completed trials that can manage traffic for unmanned aircraft systems (UAS).

A demonstration of the its capabilities was conducted earlier last week, witnessed by officials and the media in Marina South. Drone deployment on a mass scale could see them delivering parcels, inspecting buildings and ships leading to an air taxi service, as well, for the public. The system, called a UAS traffic management system, arose from “a call for proposals issued by the Ministry of Transport (MOT) and the Civil Aviation Authority of Singapore (CAAS) in 2017 to develop systems that allow for aerial drones to be used safely in Singapore’s densely populated urban environment.”

The Nova consortium was awarded the project in 2018. Proposals from three other groups were also accepted by MOT and CAAS. Each project received up to 50 percent co-funding from the government, with the amount capped at USD1.5 million.

Tan Kah Han, senior director of CAAS’ Unmanned Systems Group, said, “These findings will help further refine our policies and enhance our regulatory framework”. He continued, “This is important, as Singapore’s limited and congested airspace requires creative solutions to manage the risk posed by unmanned aircraft operations.” Han added that the outcome “will aid CAAS’ efforts to pursue more efficient ways to safely manage drone traffic at scale in Singapore.”

The Nova drone system is similar to a traditional flight management one for manned aircraft, which helps to assign and monitor routes in real time. Such an “air traffic control tower” for drones helps operators, other parties and regulators keep track of where the unmanned aircraft are at any point in time, even if they are BVLOS. Nova Systems’ partners in the project include OneSky, a U.S company that provides drone traffic management services, local telco M1 and German engineering firm Rohde and Schwarz.

Nova Group and OneSky said that “in the coming years, the two companies will work closely together with the authorities and key industry partners to develop the technologies, regulatory frameworks, operating rules and performance standards to build this system”. The maritime sector is expected to be among the first to it. Ryan Lee, MD for Asia at Nova Group, commented, the maritime environment poses less risk for testing drone operations like deliveries. “We can develop regulations, rules and standards required for maritime unmanned operations first and gain confidence and understanding before expanding to riskier environments like in the city where drones need to fly over people.” This makes sense as the Singapore maritime sector has one of the largest ports in the world, with many vessels transferring cargo and people.

Lee continued, “The deployment of drones could help reduce the cost of (transporting) people and goods, as well as make these deliveries a lot more efficient. In future, we could also reduce the carbon footprint of offshore deliveries (with drones).” He noted that overseas, Covid-19 test kits had been delivered by drones to crew on ships. An example, being  vessel anchored near a port in Greece.

Nova’s system also helps to ensure the flight paths of drones do not cross, to prevent them from possibly crashing into one another. The system can check if the craft are keeping to their designated routes, and issue alerts if they deviate due to, for example, weather effects like rain and strong winds or even bird attacks.

If the system detects that a drone is in trouble or behaving abnormally, such as not following its flight path after a set amount of time, the system can alert other drones in the air to avoid the immediate area. The system could also alert the authorities to rogue drones and assist in bringing them down.

And if emergencies arise where drones can help, then the system can prioritise flights and help to reschedule or reroute non-emergency ones. Impressively, the system has been tested in simulations for up to 500 flights at a time.

Lee explained that the system is needed to manage a large number of drone operations at the same time because, “if left completely to human operators, this would be too intricate and large an undertaking, leaving room for potential human error”.

This capability of the system is in anticipation of busier airspace in the future with more frequent drone flights and drones deployed en masse, such as for deliveries and air taxis ferrying people in the sky. Nova’s drone system communicates with drones in the air through 4G and 5G mobile networks, with telco SIM cards inserted into them.

Currently, this has been tested to work at a range of up to 2km using 4G networks. But the range could be extended with 5G, and work is now being done in this area so that drones flying, for instance, farther out to sea can still be monitored from land. If mobile communications fail at any time, the system can switch over to satellite communications, which is not otherwise used, as it is more costly, among other things.

Drone flights with the system have been tested in industrial, financial and residential areas, including at the Marina Bay Financial Centre, in Kallang, Orchard Boulevard and coastal areas near Kallang Riverside and Sentosa. For residential areas, flights were tested in Robertson Quay and Lavender. Nova Group and OneSky said that in Singapore, the implementation of such a system would require coordination between government agencies to establish a system of policies and regulations that address road safety, air traffic control, network capabilities, cyber security and national security. The agencies would likely include the Land Transport Authority, CAAS, Infocomm Media Development Authority, the Ministry of Defence and the Ministry of Home Affairs.

Lee concluded, “Given the scale of the system and the multi-stakeholder collaboration required, it will take some time to roll out the relevant regulations to ensure utmost safety and security.” And added, “We will continue working closely with the relevant regulators and stakeholders to develop the necessary rules and frameworks needed to realise the full potential of UAS tech”.