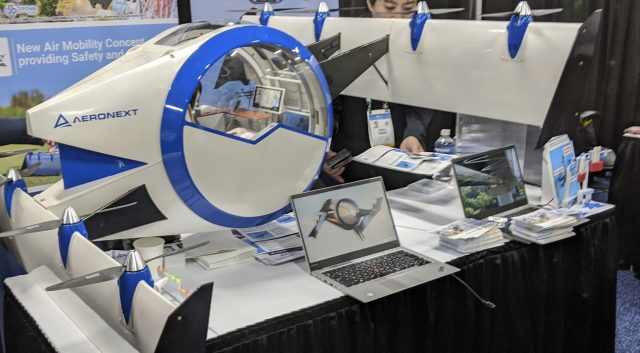 Japanese drone-maker, Aeronext, is displaying a model of its “Flying Gondola” concept at Las Vegas’s CES.

In a press release, the company said it aimed to “accelerate the acceptance by society of air mobility by accelerating the economization of new airspace through providing an unprecedented comfortable flight experience that combines both safety and comfort.

“The Flying Gondola represents a completely new concept in air mobility and is different from the conventional concept of air mobility that mainly focused on the convenience of movement only. The Flying Gondola concept is automatic navigation without the need for pilots, minimizing swaying all the times, making it easy to get on and off. It is like a futuristic Ferris wheel gondola that flies in the sky freely.”

Aeronext’s first principle prototype is equipped with both rotary and fixed wings. The proprietary drone center of gravity control technology  4D GRAVITY has many awards and contests in Japan and overseas and attracted much attention, the company claims.

The prototype is also equipped with VTOL’s center-of-gravity control technology “Tilt Body”, that solves the problems of conventional air mobility, such as reducing fear during vertical takeoff and landing, and provides smooth transition from takeoff to horizontal flight.

The Next MOBILITY announced at CES is a single-passenger aircraft, but in the future, a multi-passengers aircraft will be announced. When this aircraft is introduced into full production, we are convinced that it will be an indispensable means of transportation in the “sky movement” that is beginning to take root around the world for next-generation mobile service system MaaS (Mobility as a Service).

Aeronext’s CMO told consumer site, Extreme Tech, that she thought that it might be about 10 years before they saw Flying Gondolas out in the wild, but in the meantime, the company is going after controlled environments like theme parks.

“For now, the company is hoping to license its 4D Gravity technology to drone makers in Japan, the US, and elsewhere, and that they’ll pay up to 10 per cent of the price of their drones for a smooth ride,” the report said.