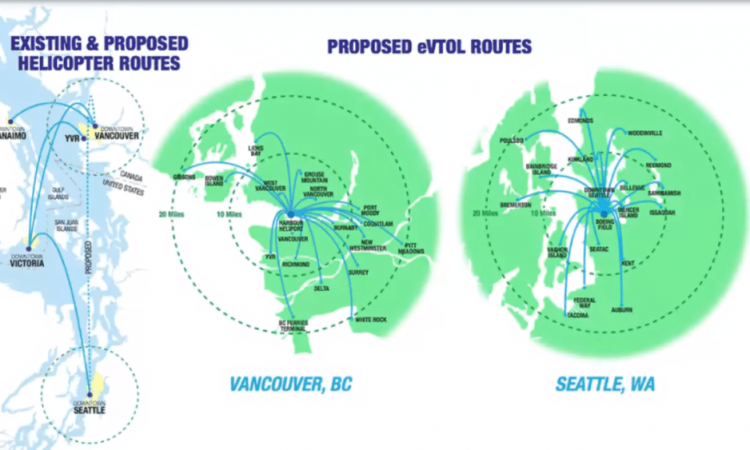 According to aviationtoday.com, the Canadian Air Mobility Consortium has been formed with partners across government, academia, industry and the investing community. This consortium plans to lay the foundations for advanced air mobility across the country, including drone delivery and passenger/cargo air taxis, with an emphasis on sustainability offered by electric aircraft.

Matching closely with NASA’s roadmap for technological development and deployment, the group is raising USD1 million from partners with a 50-50 match from Canadian federal, provincial and local governments, to conduct an economic analysis, develop operational and scenario applications, and then hold a demonstration event more likely to be in 2021.

“We need an [air mobility system to be] equitable, inclusive, intermodal, accessible, and zero-emissions on the vehicle side, to ensure that we’re progressing forward,” said J.R. Hammond, founder and CEO of Canadian Air Mobility, which is currently funded by the National Research Council (NRC) of Canada. “What has developed out of these discussions, especially during the Coronavirus crisis, is how we are focusing on building our next resilient transportation system at the core of the rebuilding and recovery phase [and] how this resilience factor can be a complement to ground infrastructure and ground transportation systems, rather than a competition.”

Just south of Canada, through a program called Agility Prime, the US Air Force and federal government have decided to offer their support behind the creation of a commercial air taxi industry both for dual-use military purpose and nationalistic economic goals. Canada’s NRC plans to approach the budding technology in much the same way.

“The goal is to create this world-class hub ecosystem related to UAM that will touch on transport of people, transport of goods, medical capabilities, [and] UAS services,” said Eric Lefebre, business director at the NRC. “We need to provide [small and medium sized enterprises] with an environment to take that low-technology readiness level innovative technology and ensure they move to a higher TRL, to certification and to commercialization … ultimately having business scalability at the end of that.”

Both the US and Canada are in an early testing phase when it comes to drone delivery in populated areas and flying beyond the operator’s visual line of site (BVLOS), though that may soon change, in part due to the urgency presented by the covid-19 pandemic.

In the US, CVS and UPS are gearing up to use drones to deliver medical prescriptions direct to 135,000 residents within an elderly community in Florida, sourced from just half a mile away. British Columbia-based InDro Robotics has been conducting similar, longer-range BVLOS tests, mostly in Ottawa.

“We have been flying BVLOS for quite some time. We were fortunate enough to start out early working with first responders,” said Philip Reece, founder of InDro Robotics. “From the very start, Transport Canada have been very supportive of the work we were doing. Obviously with it being first response, they have a slightly different need and risk matrix to commercial operations. Some of the first things we started out with back in 2014 was the ability to deliver a heart defibrillator out into the field or onto a paramedic.”

But with the pandemic shutting down traditional modes of transportation and Canada’s geography rendering many populations difficult to access without ferries or airplanes, regulators are eager to ramp up medical drone delivery.

Using cellular drones developed in partnership with Nokia, InDro Robotics is working with regulators to bring online a drone-based distribution system in British Columbia, moving supplies and spare parts from a central hospital on Salt Spring Island to medical facilities in nearby island communities no longer serviced by ferry, all in class G airspace.

“A covid-19 fast-track challenge came to us from Vancouver Island Health. Recognizing the work we’ve done already, they reached out to see if we’d be able to service routes and deliver samples, test kits and just-in-time machine parts,” said Reece. “It’s an ideal use case here because it’s short-range, BVLOS… none of those missions are over 12 nautical miles. It’s all going from a hospital, so a controlled environment, to a medical facility, many of which have got a heliport, and we’re transporting light payloads.”

InDro modified its existing Nokia drones to lower their weight, increase range and payload capacity and ensure multiple methods of communication. The drones are also equipped with onboard detect-and-avoid capability and ADS-B Out to warn nearby aircraft, though InDro plans to use NOTAMs and a temporary flight restriction if necessary.

“It’s flying over RF, with cellular, and it also has a satellite … divert-to-rally point, or cut motors and fall out of the air,” Reece explained. “But we’re cellular, and we do have range to cover all of those areas.”

Using landing ‘nests’ with cellular connectivity, charging capability and lights for nighttime landings, InDro is working with regulators to begin these medical delivery flights at night and mostly over water or in rural areas.

“This is really the mission that has taken us off our crawl, walk approach and really moved us into a run,” continued Reece. “We are working very closely with Transport Canada and Vancouver Health Authority. We’re hoping that COVID will be over before we fly, but I don’t think that’s going to be the case.”

Looking into the future, after the pandemic recedes and commercial demand for travel bounces back, Vancouver-based helicopter operator HeliJet is keen on bringing electric air taxis into its fleet to develop a ‘hub-and-spoke’ model of transportation across the greater Vancouver region and south down to Seattle, Washington.

“We look at vehicles that are hybrid-electric or otherwise and we see a lot of opportunity,” said Danny Sitnam, CEO of HeliJet, explaining his company’s focus on moving people distances between 100-400 miles. “The vehicle that’s displayed on this slide — Joby Aviation’s S-4 — is something that we’re considering, and any other vehicles of this calibre that are demonstrating long-distance capability, reducing our cost per seat mile, and at the same time bringing sustainability to our communities.”

Throughout the congested metropolitan areas of Seattle and Vancouver, Sitnam said he sees opportunities to turn 30 to 90-minute drives into 5-15 minute flights.

Sitnam also proposes using eVTOLs to better connect the congested metropolitan areas of Seattle and Vancouver, with opportunities to turn 30 to 90-minute drives into five to fifteen-minute flights. He plans on creating a new company division called Integrated Vertical Mobility to explore these possibilities, working with groups like Nexa Advisors and real estate organizations.

In the near-term, Sitnam is working with health customers to demonstrate new use cases of vertical lift using traditional helicopters. Just this week, working for the B.C. cancer agency, HeliJet began moving extremely time-sensitive radio isotopes from where they are produced in downtown Vancouver to a facility in downtown Victoria.

“Currently, they were moving [radio isotopes] by ground into B.C. ferries, which is a 3-4 hour ferry ride, before it gets to Victoria … by that time, the life expectancy was down to 18 percent of the isotope,” Sitnam said. “Today we moved our first package of isotopes and we were able to deliver them with 46 percent life remaining, so that is going to mean a lot to the patients.

“When we look at what more we could do, a group like Philip’s team could probably move them from heliport to heliport, eliminating all ground, much more sustainable, and taking it to a place where maybe we could do a delivery in half the time it took the helicopter and the ground system,” Sitnam concluded, referring to InDro Robotics.