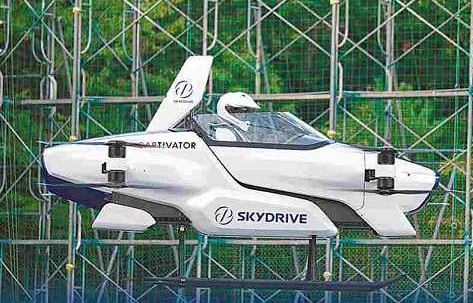 Asia News Network reports in a wide ranging article that “Flying cars, which are expected to revolutionize air transport, are currently being developed for introduction at the Osaka-Kansai Expo in 2025” and “that drones also could become a common feature in parts of Japan, if, as expected, the ban on automated flights over residential areas is lifted.”

The news network continues “The government’s commitment to the safe application of next-generation aeronautical technology means the practical use of flying cars and full-fledged use of delivery drones are edging ever closer in Japan.

“A public-private consortium of related ministries, agencies and aircraft manufacturers aims to develop a flying car for the Osaka-Kansai Expo to transport passengers between the venue and surrounding tourist attractions.

“SkyDrive, one of the leading companies in the field, is developing a multiple-propeller aircraft that can take off and land vertically, and has already conducted test flights.  The company applied to the ministry in October to become the first Japanese manufacturer to receive a Type Certificate, which certifies the safety and other aspects of an aircraft for mass production.

“The aircraft certification system will establish the safety standards required for Level 4. There are about 20 drone manufacturers in the nation, but it is thought that only a few are capable of manufacturing drones that would meet the Level 4 standard.

“The Tokyo metropolitan government conducted a test project in February that involved flying a drone over the Sumida River to deliver pharmaceutical products from a medical wholesaler in Koto Ward, Tokyo, to a hospital about 2 kilometres away.”