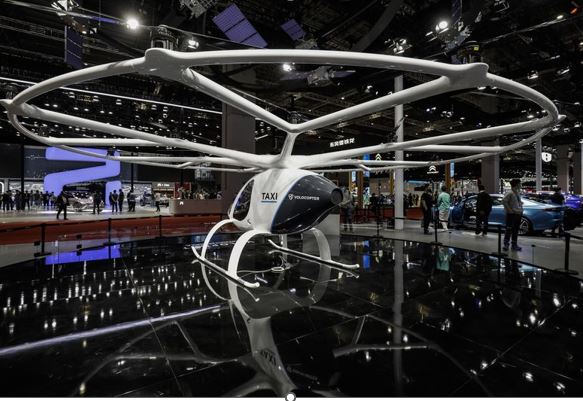 “Seletar Airport, Singapore’s second, and far less known airfield, which is predominantly where the super rich land in their private jets, is also where the future of aviation could be taking off” reports Anurag Kotoky writing for Bloomberg.

In the feature Anurag Kotoky writes “The neighbourhood, more known for its laid-back cafes in restored British-era colonial buildings and sleepy fishing villages, is positioning itself as a hub for flying taxis. Singapore has already signed two agreements with advanced air mobility startups Skyports Ltd and Volvocopter GmbH that may convert the aging aerodrome into a vertiport, or an airport where the aerial devices take off and land vertically, Jetsons-style.

“It isn’t some way off dream, either. Plans for flying taxis to be operational at Seletar are pretty immediate — as soon as 2024 — and the airport, or vertiport, could serve as a global model for what the future of mobility may look like.

“Recent interest in so-called eVTOLs (electric vertical take-off and landing vehicles) has been immense. Electric cabs stole the limelight at this year’s Singapore Air Show in February with Malaysian tycoon Tony Fernandes of AirAsia fame placing an order to rent at least 100 of them from Vertical Aerospace Ltd. Carriers including American Airlines Inc, and Virgin Atlantic Ltd have also ordered scores of eVTOLs.

“Companies like Volocopter say it’s just a matter of time, and Asia will play a large role in eVTOL adoption.”

“In Asia, you have a high concentration of mega cities that you don’t have in any other region,” Christian Bauer, Volocopter’s chief commercial officer, said in an interview. “This new industry is innovative, it’s good for inhabitants, for tourists, and also for cross-border connections to relieve the pain of congestion.”

Further more writes Anurag Kotoky “Volocopter, which predicts SD4.2 billion (USD3 billion) of cumulative economic benefits to Singapore and as many as 1,300 local jobs by 2030 from the industry, is showcasing its aircraft in the city-state later this month to increase public awareness. It’s also talked up the “political benefits” including reduced car ownership and the ability of Singapore to position itself as a torchbearer for the rest of Asia.

“Fares for passengers are expected to start at about 40% of the cost of a helicopter, according to Bauer. That could drop to around the price of a premium taxi within five to six years, he said.”