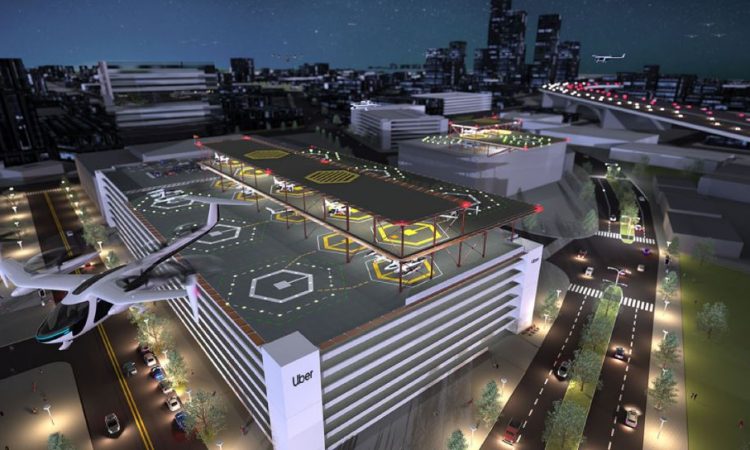 By Philip Butterworth-Hayes and Beth Stevenson

On 10 June a helicopter crashed in flames onto the roof of an office building on Seventh Avenue in New York, killing the pilot Tim McCormack.

It was another salient reminder, if any more were needed, of the complex challenges facing urban air mobility vehicle designers and operators, safety regulators, local authorities and environmental agencies when it comes to ensuring the safety and well-being of passengers and people when planning new concepts of flying in urban environments.

According to Uber Elevate’s plans for aerial ride-sharing in cities around the world – outlined in the Uber Elevate summit earlier this week – the company will start conducting demonstration flights in 2020 to measure eVTOL noise, assess community acceptance, and quantify vehicle safety and performance. With the first operations planned for 2023.

The problem is this timetable looks, at first sight, to be well in advance of the regulators’ own timetable for developing regulations to support electrically-driven air taxi operations in heavily populated urban areas.

As Federal Aviation Administration (FAA) Acting Administrator Dan Elwell pointed out to delegates at the Uber Elevate event in the past it has taken around 10 years for the FAA to certify a new aircraft type. And although the agency has adopted a speeded-up performance-based approach to developing new safety rules – based on assessing data from multiple trials and evolving the certification system along crawl/walk/run processes, using existing regulations wherever possible – it is not just the certification agency which will have to give the thumb’s up to the UAM revolution, it is the public, too.

NASA – the FAA’s partner in developing data to form the regulations –  plans to advance progress on UAM with a series of grand challenges, with GC1 planned for January 2020 when industry partners will be asked to address the foundational airworthiness UAM vehicle design readiness and robustness for UAM operations, followed in January 2021 by GC2, which will address key safety and integration barriers.

The problem facing certification agencies when addressing  UAM concepts is that they are being asked to certify not just a new platform but new types of engines, power storage and transmission systems, communications systems and traffic management systems, all integrated within a new automated and eventually autonomous operating system.

It might not take ten years for certification agencies in north America and Europe to certify all these but it is almost certain to take more than the three envisaged by Uber.

In Europe  the European Aviation Safety Agency (EASA) says it has received several applications for urban air mobility-type vehicles, adding that the certification process is underway and the authority is “working actively on these projects” alongside industry. EASA told Urban Air Mobility News that it has been working with industry for a couple of years on this, however they noted that “we are still at the beginning of the journey”.  It is supporting these developments through the introduction of a so-called special condition, as it considers that existing requirements for both fixed- and rotary-wing aircraft are not adequate for these new concepts to fly under, and this is expected to be finalised in the coming weeks.  A draft version of this VTOL special condition was published for consultation in October 2018, a spokesperson noted, adding: “EASA received a large number of comments from a large number of stakeholders, including non-traditional aviation stakeholders.

“Comments have been addressed and EASA will publish the final special condition by June 2019.” This VTOL special condition will be the backbone of the certification basis for VTOL vehicles that are not considered to be conventional rotorcraft, and this will be centred on performance-based criteria, blending existing requirements from CS-23 (Normal-Category Aeroplanes), CS-27 (Small Rotorcraft), CS-25 (Large Aeroplanes) and specific requirements.

It will also define the different safety objectives depending on the type of operation, and typically urban air taxis will be required to meet the highest level of safety, the spokesperson noted.

From the regulator’s point of view, the challenges associated with these projects vary between them, due in part to the number of different technologies and approaches being introduced. “”These vehicles are introducing simultaneously several innovations and integration of these innovations may be a difficult point. Recent experience showed this is probably the most demanding aspect even for very experienced companies.”

The electric/hybrid propulsion of these systems is new, EASA adds, but noted that in most of the proposed designs it has been presented with, propulsion/lift and flight control systems are more integrated than with conventional aircraft.  “Other aspects such as batteries integration, handling qualities and so on are also challenging, but as said, technical aspects are manageable,” they added.

Which all suggests that even with no technical hitches  – and without taking into account the views of the public – it is unlikely that the regulations for high density UAM operations will be in place much before 2025. The crawl/walk/run  data driven process underway by the FAA and EASA has not yet begun. It will take the regulators considerably more than a year to digest all the data from planned trials and propose the complex new sets of regulations required for operating air taxis in the vision set out by Uber.