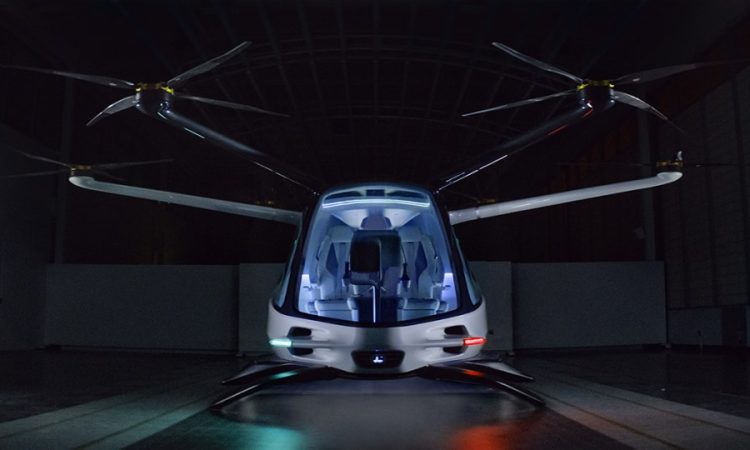 The company made a big splash last year after claiming hydrogen was the way forward to overcome the battery bottleneck that is holding so many competitors back with only short flight times and long charging waits in-between.

With a far higher energy density than lithium batteries, it offers genuine long-range flight capabilities, as well as fast refueling. Used in a fuel cell electric powertrain, its only local emissions are water with a number of ways to produce the power in a green and sustainable fashion.

Last year Alakai drew up a plan for a comfortable, very schmick-looking air taxi design in partnership with BMW’s DesignWorks and made a claim that it could hit its 400 mile, 4 hour flight endurance targets using the simplest possible airframe: a 6-rotor multicopter. No wings, no tilting rotors, no transitioning between flight modes; Skai’s hydrogen powertrain had so much energy to spare, no complex efficiency measures were necessary. This simplicity, CTO Brian Morrison said at the time, was key to another Skai advantage: He believed it would be quicker to certify than the competition. “It’ll fly next week, and it’ll be certified next year,” he claimed last year.

A year on Skai’s Chief Marketing and Sales Officer, Bruce Gunter, admits, “Some of the statements made previously were overly ambitious and said in the excitement of the moment.” Adding, “That’s what happens when you’re pushing the envelope, but we’re working hard to get there.”

So where is Skai actually at right now in the development cycle?

The original airframe made it to the tethered flight stage, and now the company has moved on to a second generation design, which is approaching completion with mainly systems work only remaining. The testing, up to this point, has been unmanned, where the full-sized airframe is flown with a drone-style controller. The team is currently close to 40 people, but has expanded as much as 70 with various contractors. Eventually, the Skai will accommodate one pilot and four passengers, with a carrying capacity of 454 kg.

The target for manned flight has shifted to early 2021, but Skai CEO Steve Hanvey, won’t be surprised if it takes longer: “Igor Sikorsky once said to me, when you’re doing these kinds of technology projects, don’t try to predict the future, because it tends to change,” he says. “Right now, we’re capable of flying it from the ground. In fact, at this point, I’m flying it about 50 feet away from the aircraft. Very quiet, very little air wash compared to a traditional helicopter. I’m flying it with my thumbs like you’d fly a drone. In the software, it’s capable of taking off and hovering by itself, but we prefer to have physical control.”

As for certification, Skai is about two years into what’s typically a five-year process with the US FAA. There’s an approved FAA project plan, and the team is working with regulators on how the certification process for these radically new eVTOL aircraft will be certified. Once achieved and put into commercial operation, Skai says its “point to any point” air taxi service could cost about the same per mile as a standard Uber.

Meanwhile, Hanvey stresses that he and his team have a wealth of experience in this area. “I’ve been certifying aircraft since 1980,” he says. “Military programs, helicopters, fixed wings, small and large, Our whole team brings experience from the aerospace business around what it takes to get an aircraft successfully certified, and what does it take to support it.” With battery-powered competitor Joby Aviation targeting 2024 for certification, and Germany’s Lilium among several companies talking about 2025 as a launch date for air taxi services, it now seems unlikely that Skai will beat the field and be first to market. But Skai’s liquid hydrogen power source could still offer it some huge advantages if it’s ready by then.

The decision to use a liquid hydrogen is unusual, but based on the fact that you can carry more energy for a given volume and weight of tank space if you use liquid rather than compressed gas hydrogen.

Where ZeroAvia talks about its gaseous hydrogen systems offering a 10-11% mass fraction (the proportion of the total full tank weight that represents actual fuel), and Val Miftakhov speaks of mass fractions as high as 30% being realistically achievable with liquid hydrogen, the Skai team isn’t ready yet to discuss its own tank technology.

“The specific numbers are proprietary to what we’re doing,” says Hanvey. “We’re working with our tank people as to how much we can get in a tank, what the weight of it is, and what the percentage of the total aircraft weight this will be. While we’re working with people who are close to the number, it’s premature to be giving out the information.”

One challenge being that you need to keep liquid hydrogen extremely cold to keep it in its liquid state. At atmospheric pressure levels, we’re talking just 20.28 kelvins above absolute zero (−252.87 °C, or −423.17 °F).

That temperature can rise a little if you’re willing to pressurise as well as cool (using a cryogenic system running between 250 and 700 bar of pressure), but Gunter says that’s not part of Skai’s plans, as “even a moderately pressurized system has significant weight penalties.”

Super-cooling it does entail extra energy loss during the liquefaction stage, but the net result will still be a much longer range aircraft than those powered with gaseous hydrogen, or certainly lithium batteries.

“The good thing in all of this,” says Gunter, “is the notable developments that occur in this space on an increasing basis. The efficiencies we’ve seen in fuel cells and the same the industry is seeing regarding H2 production all point to increasing effectiveness of any form of H2 as a future focused solution.”

“There’s a number of naysayers about what we’re doing with hydrogen,” adds Hanvey. “But we believe we’ve gone from the question to the possible, and it’s now the probable. We know we can fly with hydrogen, and the question is just how quickly we can get it to the market. And based on our experience, we think we can get there a lot quicker than perhaps the market will give us credit for.”