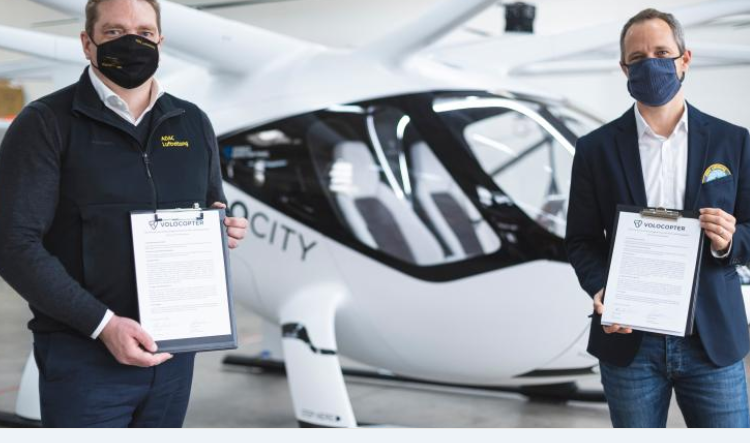 According to Volocopter: “After publishing the results of the world’s first feasibility study about piloted multicopter use in rescue services, ADAC Luftrettung has invested in a reservation for two VoloCitys to prepare for operational tests in 2023. After two years of close collaboration, this is the next step for performing operational tests on multicopter use for emergency medical services.”

“After the groundbreaking results of our feasibility study, we are expanding our technological lead with regards to integrating multicopters in rescue services. Volocopter is the only eVTOL on the market that is advanced enough to reliably plan a test program with for our purposes,” says Frédéric Bruder, Managing Director of the non-profit ADAC Luftrettung. “We are excited to have secured our right to receive amongst the first VoloCity multicopters upon receival of type certificate.”

“Our partnership with ADAC Luftrettung, Europe’s largest helicopter operator, clearly demonstrates the potential Volocopter multicopter technology brings across all areas of mobility – in this case as a new means to get medical help to more people, faster,” remarked Florian Reuter, CEO of Volocopter. “By reserving their first two VoloCitys, ADAC Luftrettung are making a clear statement of confidence about our readiness to deliver and in our multicopter technology.”

ADAC Luftrettung and Volocopter’s partnership began in 2018 when they announced a joint case study launch sponsored by the ADAC Foundation with the Institut für Notfallmedizin und Medizinmanagement (INM, Institute for Emergency Medicine and Medical Management) at Ludwig Maximilian University in Munich to computer-simulate aeromedical missions in two regions in Germany. After simulating more than 26,000 emergency operations with multicopters for the Ansbach rescue service area with the air rescue bases in Dinkelsbühl, Bavaria and in Idar-Oberstein, Rhineland-Palatinate, the full study was published in October 2020.