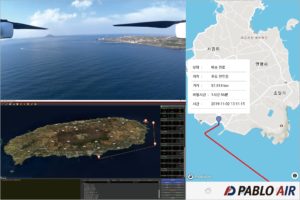 Drones delivering packages from Incheon Port to nearby islands in South Korea, is expected to be commercialised next year, according to prnewswire.com. This service is currently conducted using 10 passenger ship routes. However, PABLO AIR, a member company of the Born2Global Centre, plans to use its unmanned aerial vehicles to enable a higher-efficiency service.

Selected for Incheon’s robot promotion program, PABLO AIR offers an integrated system based on drone swarm technology. The operating software are tailored to the characteristics of the Port which covers an airport, numerous ports and industrial complexes.

PABLO AIR, based at Incheon Port, and capable of operating 100 drones at one time, recently demonstrated Korea’s first trial of long-range drone operation over the sea which covered 57.5 kms and took close to 2 hours.

The company is planning another test flight of 50 kms from Incheon Port to Jawoldo and Ijakdo islands in Woongjin County. Incheon Port Authority will provide an area exclusively for the takeoff and landing.

A spokesperson said, “With its airport, industrial complexes, ports and free economic zone, Incheon is well-suited for the development of the technology. We aim to fill in the logistics void in island regions by utilising the port’s infrastructure and drone technology.”

Founded in 2018, PABLO AIR was the first Korean company to successfully conduct a long-distance over-sea drone delivery. Its core business is the development of drone swarm platforms and provision of related solutions.

Established by graduate and doctoral researchers in aerial technology, PABLO AIR succeeded in securing KRW3 billion in Series A funding in collaboration with Lee Soo-man, chief producer of SM Entertainment and the KTB Network. It has completed the development of its own drone hardware and is currently working on a software solution that integrates both manned and unmanned drones.

The company is also pursuing projects in areas such as drone swarm technology, disaster and smart city environment monitoring. Its ultimate vision is to develop benchmark technology and set a new milestone in the PAV (personal air vehicle) air taxi industry.